How Not To Lock Your Bike

Seasoned boaters enjoy going to the boat ramp and watching other boaters try and back their trailer down the ramp.

I pulled up to the bike rack early last week and this is how the bike next to mine was secured. 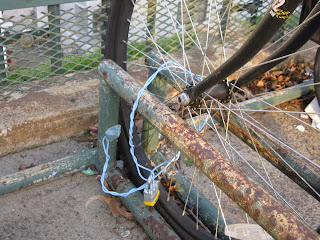 The owner of this bike had taken some blue tie wire and twisted the ends together. He cleverly (I use this term loosely) masqueraded the twisted joint with a bit of duct tape. He then looped the make shift cable through the spokes and the bike rack and secured it all with a lock.

Whether this bike could be stolen with minimal effort is not up for debate. The real question is, "what method of thwarting this security barrier should be employed?".

One final word of caution to any would be thief. While this bike was equipped with brake calipers, they did not sport the associated brake shoes. Steal at your own risk!
Posted by Paul at 8:00 PM No comments:

Two Sunday's ago was an absolutely gorgeous day. After not being on the bike for almost a week due to traveling and inclement weather, the day was shaping up to be an amazingly gorgeous day for a bike ride. With the forecast calling for temperatures in the low 70's and cloudless skies, my Specialized road bike begged to be ridden long and hard.

Yet despite the amazing weather and the incessant begging of my Specialized, I donned not Lycra. Instead, I put a couple panniers on my Bike Friday, loaded them with picnic supplies and a camera.  Then my wife and I spent the better part of the day riding around the Yorktown Battlefields.  This past Christmas, I had bought her a new SLR camera and we spent this gorgeous Sunday learning how to use it.

The bike can't always be the focus... 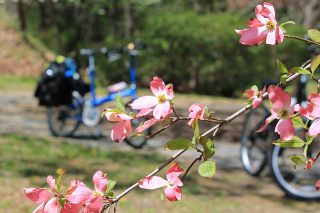 My commute to work Tuesday morning was what can only be characterized as a "Tender Moment".  The result of sitting on one of these... 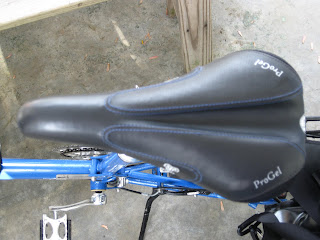 the morning after eating 3 of these... An early morning cup of java... 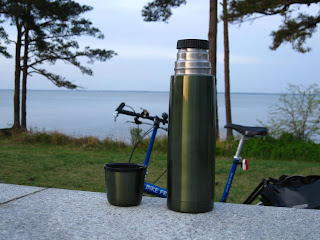 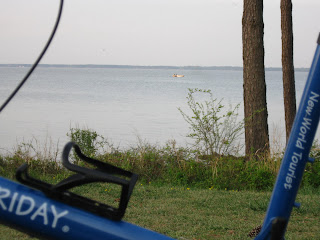 The James River Bridge from the Lion's Bridge... 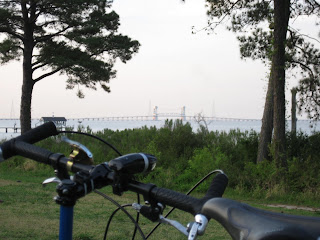 A sunrise over Bike Friday... 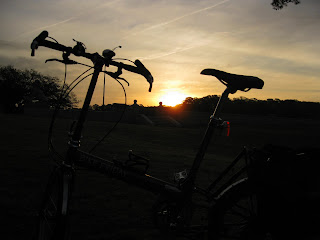 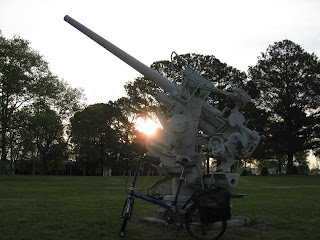 On a recent Saturday morning, when I got up it, I looked at the forecast and it called for a drearily cloudy day, but the temperatures were moderate and no rain was in sight. I had a lot of errands to do, so I put on a light windbreaker and jumped on the cargo bike. 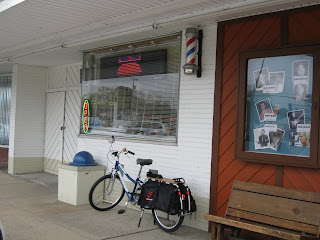 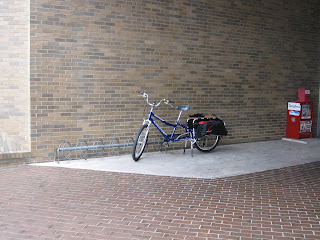 I rode 8 miles to the Post office to drop off some mail... 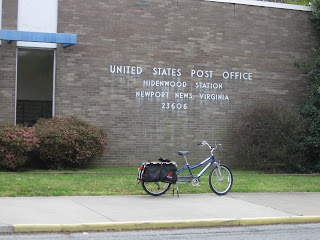 I rode 1 mile to the hardware store... 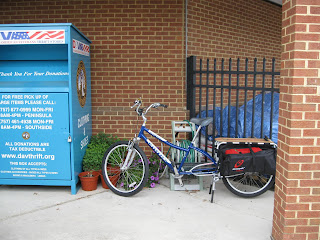 I rode 9 miles to the grocery store... 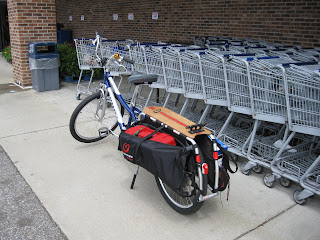 I rode 1 mile back home. The fruits of my labor, if riding a bike can really be called labor... 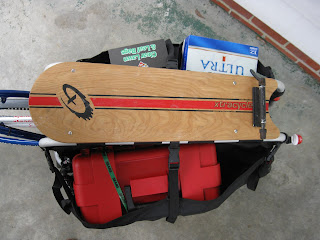 On a ride home recently, I passed two riders heading in the opposite direction, I waved.

About a half mile further down the road, I passed another rider heading in the opposite direction, I waved.

About a quarter mile further down the road, I passed yet another rider heading in the opposite direction, I waved.

All four of these riders had several things in common...

- They all were clad in Lycra from head to foot.
- They all wore sleek sunglasses.
- They all rode high dollar, carbon fiber, road bikes.

Now, I have no problem with their attire or choice of bikes. I own and don my share of Lycra, I wear sunglasses to protect my eyes and enjoy riding my carbon fiber, road bike.

It was the fourth thing they all had in common that I find irksome...

- none of them waved back!

Was their lack of salutation because...
- they didn't like me? I highly doubt it. They didn't even know me. Not to mention the fact that I am a very likable, if not a downright super guy.

- the Lycra they wore was so tight that it restricted their arm movement? I highly doubt it. I wear Lycra on occasion and my movements are not hampered in any way shape or form. Well, that's not entirely true, it does have a tendency to keep certain things from shifting.

- they didn't see me because they wore dark sunglasses on a cloudy day? Possible, their glasses were indeed dark and the sun was no where in sight.

I do not believe the reason for those four riders not waving can be found in the physical. I think it's a mentality thing. When someone dresses in their best Lycra, sports a sleek pair of sunglasses and climbs on their carbon fiber steeds, they have a tendency to focus on going far and going fast. What they fail to realize is that while this single minded focus on performance will greatly enhance their power output and cardiovascular system, it will also rob them of the simple pleasure of being on a bike.

They breathe to fuel their engine and are robbed of the subtle fragrance of fresh air.

They pedal for speed and distance and are robbed of the joy of the journey.

They lean over the handlebars to escape the wind and are robbed of the wind blowing away their cares.

They focus intently on the road in front of their wheel and are robbed of the passing beauty that surrounds them.

They brake to maneuver their bikes and are robbed of slowing down to discover something new.

They reach down to hydrate and are robbed of the richness that comes from reaching out to their fellow mankind.

They're on their bikes and that in and of itself is a plus. Sadly though - they're missing out on so much more:-(
Posted by Paul at 7:11 AM No comments: 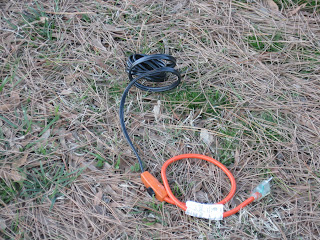 ...I thought it was an extension cord.

When I picked it up and studied it closer, I wasn't sure what the heck it was. Not wishing to solve the mystery standing on the side of the road, I threw it in my bag and went on my way.

When I got home and read the tag, I discovered it was a Water Pipe Freeze Protection Cord. I could use one of those.  As luck would have it, as I passed by the same spot the following day, I found the manufacturer's instructions. 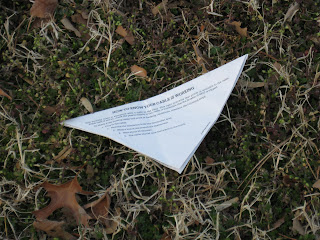 I'll never have frozen pipes again. Why? Cause I ride a bike!
Posted by Paul at 6:02 AM No comments:

Playing chicken with a tank... 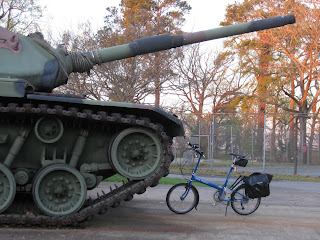 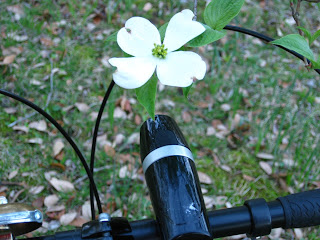 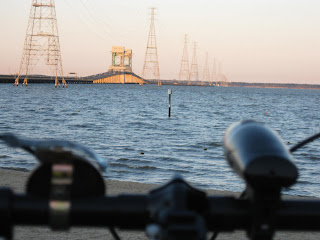 In the spirit of full disclosure, I must admit that even on a bike it is possible to migrate to a state of isolation as well. Case in point. I have been riding my current commuting route twice a day for just about every working day over the past 15 years. Just recently, on a typical ride home, I noticed this... 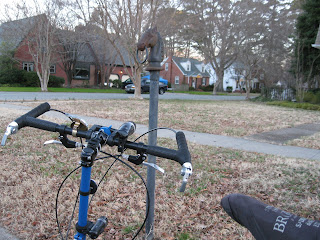 ...a hitching post. I could go down the path of trying to surmise the purpose of such a rare device in such an unusual place. As I've said, I've been riding this route for 15 years and I have yet to overtake or be overtaken by a horse. In fact, I've never even seen a horse. So why is there a hitching post on the side of the road? I don't know the answer to that question and the fact of the matter is solving that mystery is not the point of this post.

The real question is, why is there a hitching post on the side of the road AND I'VE NEVER NOTICED IT BEFORE?

It's not like I zoom past it. I'm riding along at a comfortable pace of only 12 mph.

It's not like it's too far from the road. It is right on the side of the road.  It can't be more than 4 or 5 feet from the tip of my handlebars as I ride by.

It's not like it's blocked from view. It's right out there in the open.

If all these things be true, and they are, then how in the world can I pass by this thing more than 2000 times and never see it?

Perhaps bike commuting has more to teach me still.

There is so much more to see, if only I look around.

There is so much more to find, if only I seek.

There is so much more to experience, if only I open myself up.

I'm not likely to pass this hitching post again without taking notice, and when I do, it will serve as a reminder of this invaluable lesson.
Posted by Paul at 5:24 AM No comments: 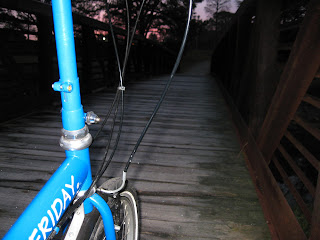 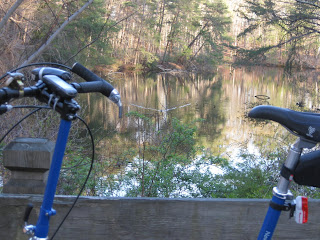 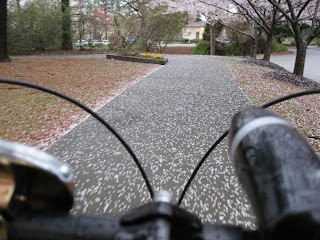 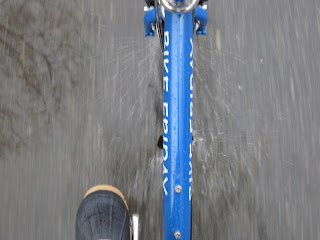 A fog over the James River Bridge... 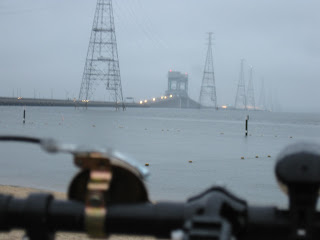 This week was the wettest, dreariest week this year.  One day as I was riding home, clothed in rain gear from head to toe, I pondered the cause of such poopy weather.  Then I looked down... 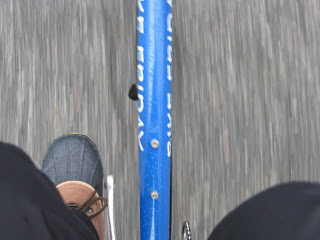 ...and saw the water beading up on my top tube (Note: Since this is my Bike Friday, it's also my down tube).  The answer became crystal clear!  The mystery was solved!!  I knew with perfect clarity why the entire Eastern seaboard was inundated with a mix of rain, sleet and snow!!!

The weekend before - I washed and waxed my bike!!!!