One of the things that caught my attention at the NAHBS were the many unique components that the builders custom designed and crafted to suit their particular need or desire or whim.

I should note that more often than not, the function of these custom components could have easily been satisfied by commercially available and mass produced devices. However, that would have been too easy. Even the more obtuse among us perusing the many booths that constituted the NAHBS could not help but conclude that these builders didn't know how to find the easy road, much less take it.

Yet with this veritable hoard of high quality, readily available, commercial products that are more than sufficient in satisfying the form, fit and function of shifting, CYKELMAGEREN opts to add their own twist to the "shifting" landscape. 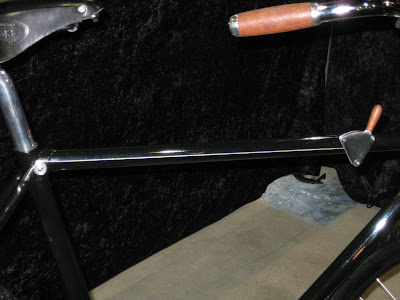 I stood there staring at it for upwards of a minute and then finally gave in. "OK - I give - what is it?". 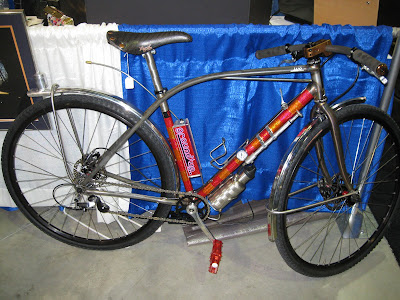 It's a flame thrower" was the nonchalant reply.

Then it all made sense. The fuel was contained in a hand pressurized water bottle fastened to the down tube. 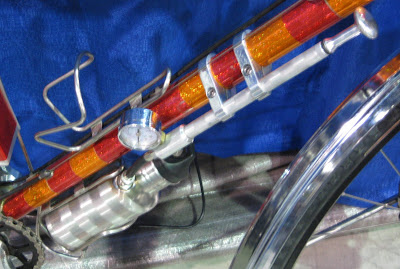 A pilot light was maintained in the canister mounted strategically on the aft end of the rear fender. 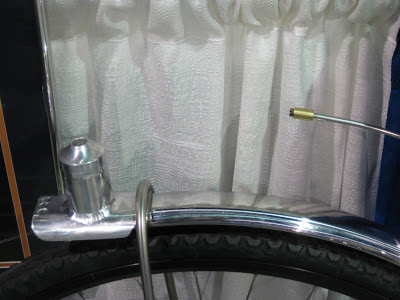 Every morning, the very last thing I do before climbing on my bike and riding to work is mosey over to the back door of my garage and dispense of any processed coffee.

This morning as I stood there fulfilling this essential ritual, I beseech you, gaze upon that which I beHELD! 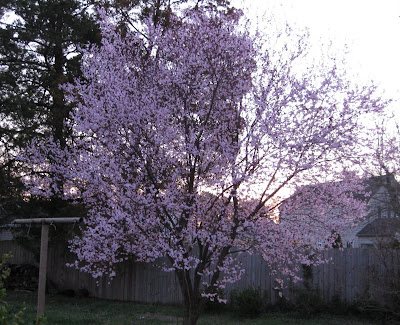 Ahhhhhhhhhh - Spring!
Posted by Paul at 8:41 PM No comments:

This blog is named CyclingAffair in a feeble attempt to capture, as succinctly as I know how, my love and passion for bicycling.

Last month, I attended the North American Handmade Bicycle Show (NAHBS) in Richmond, VA. There were some really awesome bikes. Stuff to make a man droll. What really caught my attention though was the passion and love that all of those special, talented builders had for their craft. Sure, you could see that love when you stood back and looked at the bike as a whole. Not only were they functional and efficient machines, but they were truly works of art. 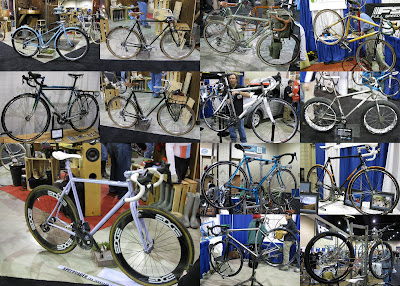 Yet, I would maintain that if you truly wanted to capture the essence and depth of the builders passion, you needed to step a little closer and behold the distinct and subtle details. These intricacies did not necessarily add to the form, fit or function of the frame but they embody the love that each builder lavished upon their cherished creations. 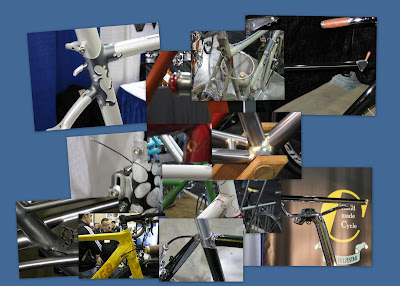 It's that love that I want to capture in the next few posts.
Posted by Paul at 7:30 AM No comments:

I realize that my posts have been rather sparse of late. I beg of you my faithful readers, think not it's due to a waning of my passion. The fact of the matter is, I have been on the road a bit recently and access to Internet has been minimal, if not sketchy at best. I have alot of posts that I'm working on and will be rolling those out in the not-too-distant future.

In the meantime, I leave you with a picture from my recent travels that captures the essence of South Louisiana! 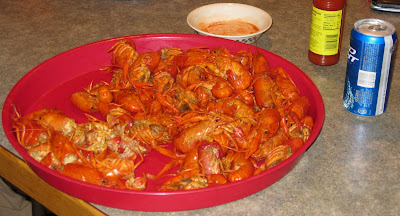 My Approach to Bike Advocacy

A couple weeks ago, I blogged about Cyclist and Driver - The Conflict I ended that post by posing the question, "What are we as cyclists going to do to shift this paradigm?"

For me, my bike is becoming more and more a viable mode of transportation. Oh don't get me wrong, I still ride for fitness, sport and recreation.

Yet now, I find myself reaching for my bike to get to:
- work
- the store
- the gym
- church
- the list is growing all the time.

Riding my bike in my community is NOT convenient. Newport News, VA is no where near being labeled a "Bicycle Friendly City". Bike lanes are next to non-existent. The roads are crowded and dangerous. There are more than an insignificant number of drivers who hold to the opinion that bicycles do not belong on the road. Hardly a week goes by that I don't have to take evasive maneuvers to avoid being hit by a careless, distracted and/or inconsiderate driver.

The whole thing becomes frustrating at times. Turning the tide of public opinion and influencing city planners and officials is a daunting task to say the least. In the spirit of full disclosure, I must confess that I have not actively participated in championing the cause of bicycles in my community. I have taken a more passive approach to bicycle advocacy:

First - I stay off the main roads to the maximum extent practicable. I plan my routes so that they take me on the side streets and through the neighborhoods. Of course, this results in longer routes, but I don't necessarily consider that a bad thing. I like riding. When I'm on my bike, I'm in no particular hurry to get where I'm going. I realize that by not taking the main roads that I am essentially giving motorists what they want and risking further feeding the sentiment that cyclist don't belong. That may be so and while I recognize that I have every bit a right to take those roads as all those motorists do, I am also a realist. Those roads are dangerous, the motorists are at best insensitive and oblivious to cyclists and while physics was not my strong suit in school, I did take enough away to understand that in an accident, an automobile will come out on top every single time.

Secondly - I use bike paths if they are available. The bike paths in this city are next to non-existent and the few that do exist are a joke and further underline just how clueless city officials are with respect to cycling infrastructure. The paths are separate from the road and are essentially widened sidewalks. Therefore, they cross every side street and driveway without being painted or no signs of any sort. Cars invariably pull up and stop right in the way of the bike path. Cars are constantly turning into and out of these side streets. The city seems oblivious to concept of sweeping and therefore the the bike paths are usually littered with debris. Then there are the pedestrians who invariably walk two or three abreast and don't even get me started on those who walk their dogs on leashes with the dreaded telescoping cord. All that being said, if there is a bike path, I ride on it.

Third - I obey ALL traffic regulations (kinda:-). I ride on the right side of the road, I signal my intentions and I stop at traffic lights and stop signs, etc. My motivation here is to send a message to motorists that not all cyclists are reckless, inconsiderate rebels that thumb their nose at the law. The "kinda" is thrown in there because I have been known to ride through a traffic light occasionally, when after one cycle, my piddly amount of metal is unable to signal the light to change. In those cases I look both ways to make sure it is clear and slowly cross the intersection. Furthermore, I am also consistently guilty of rolling stops to avoid unclipping.

Finally - I wave to motorist. When a motorist exiting a sidestreet or driveway allows me to go by instead of pulling out in front of me - I wave. When a motorist making a left turn, waits until I pass instead of turning into me - I wave. When a motorist passes me on my left and gives me ample room instead of crowding or honking at me - I wave. Are these motorist doing anything special? No - they are simply obeying the law. However, I wave - I smile - I mouth the words "thank you" all the same. It's my little way of letting drivers know that I appreciate them noticing me, being considerate of my well being and sharing the road. I'd like to think I'm changing the way motorist view cyclists - one wave at a time!
Posted by Paul at 6:30 AM No comments:

"You have a hole in your pants!" These were the words uttered by one of my co-workers. I immediately reached for my butt to ascertain the legitimacy and extent of said hole. Sure enough a mere 1-1/4" from the crack of my butt was a hole that had no business being there. 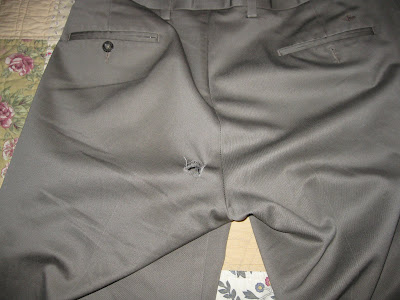 I was horrified, not by the prospect of spending the rest of the day walking around with a hole in my pants, but by the fact that I would eventually have to go home and tell my wife. She had just bought these pants. She had invested her time and energy to go shopping for them. I'm sure she paid a pretty penny for them. Yet after all those sacrifices, I manage after only a handful of wearings, to ruin them.

When I went to my bike that afternoon for the ride home, I realized the culprit for said hole. The lycra cover on the seat I was using had worn down and the underlying foam was exposed and flopping about. 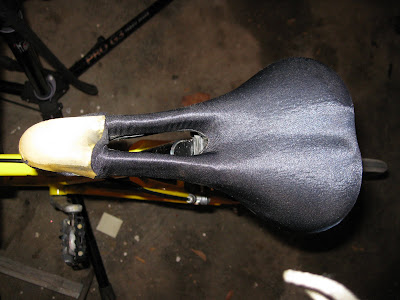 Underneath the foam, the plastic base of the seat was inundated with a sundry of sharp metal slivers. 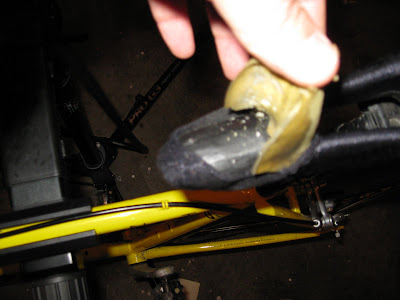 Obviously the foam peeled back and these metal slivers had an unabated access to my practically brand new pants.

My first order of business upon getting home and opening a cold beer. Replace bum seat! 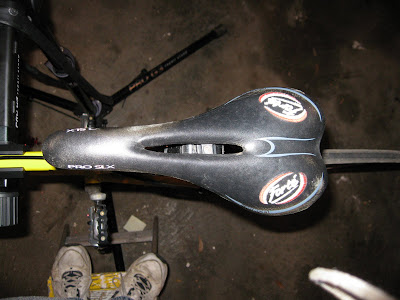 Spring is in the Air

Monday morning, when I climbed on my bike and headed to work - the sun was well up in the sky and I needed not to reach for the lights.

Monday afternoon, when I climbed on my bike and headed home - the sun was well up in the sky and I needed not to reach for the lights.

That was a first for the year. Could it be that the long dark days of Winter are losing their grip to the emergence of Spring? Me thinky so!! Yea!!!
Posted by Paul at 8:00 PM No comments: