My Steed of Late

With my upcoming bike tour, I've been logging all my training miles on the Surly. 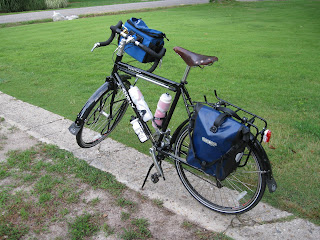 My reasoning is two fold. First - I want to get accustomed to how this bike rides. The verdict so far - fabulous. It's not as fast or responsive as my Specialized, but it is a smooth, comfortable ride. Secondly - with this bike being relatively new, I want to break it in a bit so I can make any fine adjustments and assure there are no mechanical glitches. The verdict so far - flawless. She runs like a well oiled machine.
Posted by Paul at 5:30 AM No comments: 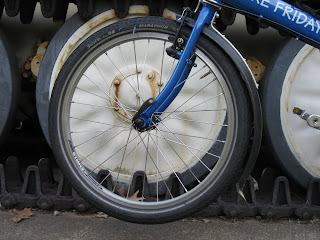 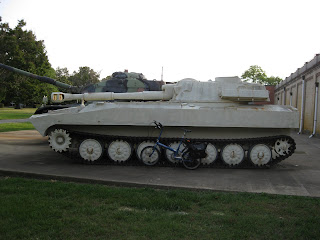 Where Have I Been

My lack of posts lately has, I'm sure, caused concern on the part of my plethora of faithful readers. No doubt you've been wondering where I've been.

Well, to tell you the truth, I've been putting my head down and logging in the miles. I've not stopped a lot to enjoy the view, take pictures or write. I know, it's a travesty of sorts, but I'm afraid it can't be helped.  I had / have a few big summer trips that necessitate my being in some semblance of shape in order to fully enjoy them.

The first was actually a couple weeks ago, when several guys from work and I went on our annual weekend ride in the Shenandoah Valley. Which I'll cover in more detail in a separate post. The second is coming up in a few weeks time, a week long, self supported tour in the Adirondack's of upstate New York. I was initially taking this trip with someone else, but due to family commitments, he had to back out. So now, I'm doing this trip solo. Again, I'll cover that trip in more detail in future posts.

Moron On A Mongoose

The intersection was filled with flashing blue and red lights compliments of a fire truck, ambulance and police cruiser attending to what appearered to be a serious accident where an SUV T-Boned a small sedan. The SUV sat in the middle of the intersection with it's front end completely crushed and it's front air bag deployed. The small sedan sat off to the side with it's driver side door completely crushed and it's side air bags deployed. The EMTs were busy attending to, who I assumed to be, the driver of the small sedan laid out on a stretcher. The police officer was occupied trying to unsnarl the rush hour traffic that had ground to a halt.

I pulled up to the intersection and waited for the officer to signal me to cross. After a couple of minutes, a young man riding a Mongoose mountain bike approached the intersection. With earbuds in his ears, he wasted not a moment in ignoring the flashing lights, the bumper to bumper traffic, the injured driver, the broken glass, the emergency personnel scattered about as well as the officer's direction and darted across the intersection. What a disrespectful, inconsiderate, self centered moron.

It's Idiots like him that leave a bad taste in my mouth for cyclist. I can't imagine the taste he left in the mouths of the police officer, firefighters, EMTs and countless motorists on all sides of the intersection. 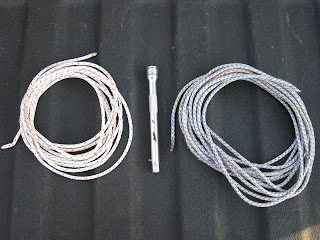 I commute to work.

I blog about my commute.

The place I work prohibits cameras.

Blogging without pictures is, well, missing a dimension or two.

This was my dilemma. How do I carry a camera to work, without carrying a camera into work? I wrestled with this perplexing puzzle for quite some time and experimented with a sundry of solutions to no avail.  Just as I was about to give up, I happened upon the right combination of words in my Amazon search - "Personal Safe"!

A small, sturdy, metal, lockable box with a cable lanyard. Could it - would it - be the answer to my prayers. With a leap of faith, I bought it.

I loop one end of the lanyard around my rear rack, through my Pannier and into the metal box with my camera... 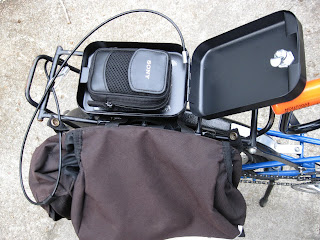 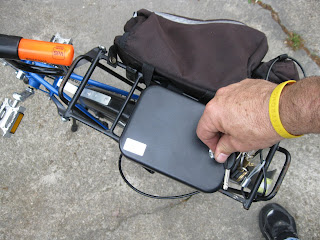 Place it in the pannier... 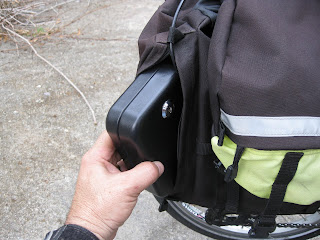 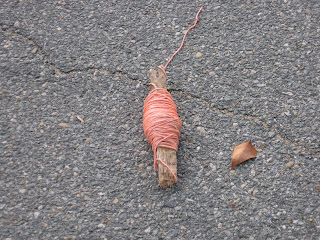 That Little Thing Between My Legs

I fancy riding home from work one day and being stopped by an attractive young lady (blonde) who boldly inquires, "what's that little thing between your legs?". 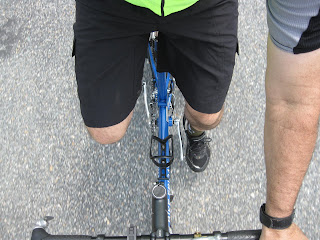 I would nonchalantly reply, "What - this - oh - it's my folding bike!". Then I would proceed to whip it out from under me and deftly fold and unfold it to demonstrate that not only is it rigid enough to ride, but flexible enough to bend. After that, I would stand there silently and let her admire it up close and personal. Then at just the moment that I saw the glint of lust twinkle in her eyes, I would drop the pick-up line of all pick-up lines, "would you like to ride it?".
Posted by Paul at 5:20 AM No comments:

After more than 250 miles over the last week, my road bike was ready for a little R & R. 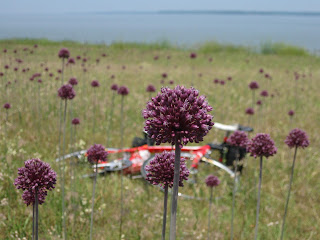 I let her be for a bit, then I gently woke her up, checked her for ticks and we rode on.
Posted by Paul at 5:30 AM No comments:

On a recent ride to work I happened upon this sign strategically place next to a 4' deep hole. 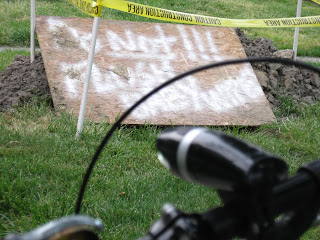 I guess my job ain't the only one that can be a bit frustrating at times.

Discovering plumbers with a sense of humor - another advantage of commuting by bike!
Posted by Paul at 6:14 AM No comments:

Bike Friday ready for another commute... 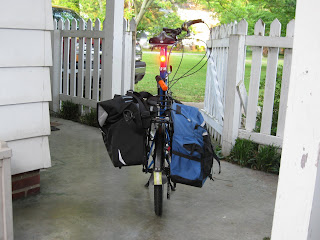 Rails but no trails... 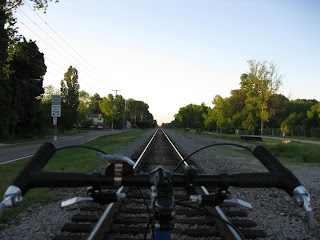 A sunrise in the neighborhood... 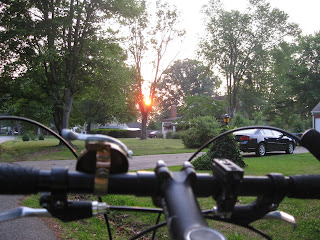 A breaking storm over the James River Bridge... 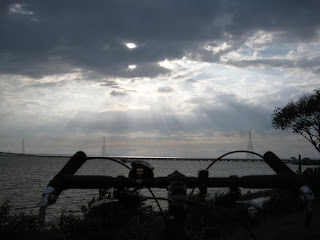