“I'm sorry. I didn't see you. It's my fault.” That's what he said. I’m referring to the driver of the car that almost ran me over.

I was riding home tonight, through the same neighborhood streets that I've ridden home hundreds of times. It was dark. There were no street lights. That made it even darker. I approached an intersection and saw a car approaching from my right. I had the right of way. He had a stop sign. Yet, I instinctively applied the brakes. It was a good thing I did, because he barely slowed down and pulled out right in front of me. I was riding my Christmas Bike and, literally, was lit up like a Christmas tree. 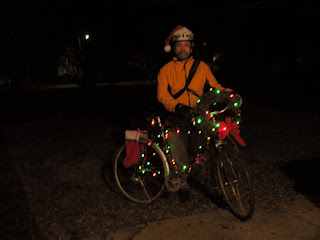 You would have to be as absolutely blind as a bat or as obtuse as a loon to not have seen me – yet he pulled out right in front of me.

One moment I was be-bopping along singing "God Rest You Merry Gentlemen" and the next I clinging to my brakes for dear life. I yelled out "why don't you fricking pay attention!" What is it that causes a man in but an instant to switch from singing about the saving grace of the new born King to practically using the “F” word in the same sentence? That is an ethical dilemma and theological debate that I will let rest and probably never pick up again.

“Why don’t you fricking pay attention!” In the darkness, I failed to realize that he had his window down. Lucky for one of us, I kept me expression of dismay and frustration in the semi-rated “G“ mode. Needless to say, I was not prepared for the words that happened upon my ears. In the dark recesses of the vehicle that came within inches of barreling over me I heard, in a gentle, genuine voice, “I’m sorry. I didn’t see you. It’s my fault!"

After my close brush with death, I continued to ride on in the darkness. I felt strange. Here I was clearly in the right of way. I was lit up like a Christmas tree. I was dressed in a bright yellow jacket. Yet, as I and my arch enemy – the dreaded thing called an automobile, went our separate ways, it was I who felt guilty for uttering the word “fricking”.

What’s the deal with that? Could it be that my arch enemy, really isn’t an enemy at all? Is all this just an honest mistake or a legitimate misunderstanding? Don’t get me wrong, there are people who drive cars that are complete “A-holes”. Let’s be honest, there are people that ride bicycles that are complete “A-holes” as well. Yet, tonight’s encounter reminds me that the aforementioned “A-holes” on both sides of the transportation debate, represent an infinitesimally small majority. The rest of us are normal, everyday, “I’m sorry – I didn’t see you – It’s my fault” kind of folks.
Posted by Paul at 6:17 PM