For the last 20 years of bike commuting, street clothes have been my normal attire. I like to keep things simple. To wear cycling specific clothes goes against that simplicity mantra. I would have to figure out a way to carry clothes, I would have to take the trouble to daily pack clothes. I would have to change upon arriving and leaving work. All these "I would have to" statements run contrary to my psyche.

It's just so much easier for me to get up, get dressed and jump on the bike. That being said, recently I've endeavored to change my commuting apparel. I've thrown my street clothes in a pannier and donned cycling shorts and jersey. Over the last week I've:

- forgotten my underwear one day, thankfully I found a spare pair in my desk drawer. Not sure how they got there or if they were dirty. Wasn't about to give them the sniff test to find out.
- forgotten my belt twice and spent the entire day walking around with my legs spread apart and constantly pulling up my pants.
- spent more time fishing out my keys and wallet and such upon arriving at work, home and a sundry of destinations in between.
- changed clothes in my office once while totally forgetting to shut the door. I realized this impropriety as I was standing there butt naked. Thankfully, it was the end of the day and everyone else was gone. I hate to think of the envy my stellar physique would have caused upon the middle aged men in my department. Even more I shutter to think of the incapacitating lust that would have ensued upon the poor females in my department were they to gaze upon such wonderment.

All that being said, I'm back to street clothes. 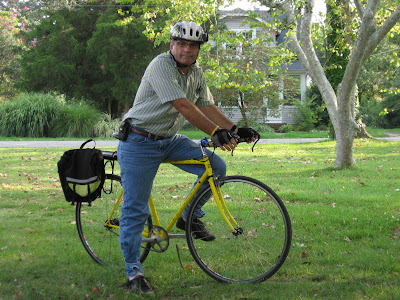