Idiot - We Work For An Idiot

"Idiot - we work for an idiot!" That's what my secretary said as I walked into the office this past Thursday morning. This Summer has not only been an absolute scorcher in terms of heat, but we've had practically no rain for months. Everything was dry and dead. I use the term "was", cause Thursday morning as I readied for my commute to work the weather forecast (compliments of CNN) read something like this:

..."Tropical Storm Nicole only lasted a few hours, but its remnants, along with a stalled frontal boundary, are expected to dump heavy rain Thursday on parts of the Eastern Seaboard. Flood warnings are in effect Thursday for parts of the Carolinas and southeastern Virginia. Flood watch advisories are in effect from eastern South Carolina to central and eastern parts of New York, Vermont and New Hampshire."...

"southeastern Virginia" - heck that's where I am! It was time to break out the "Shower Pass" rain gear. 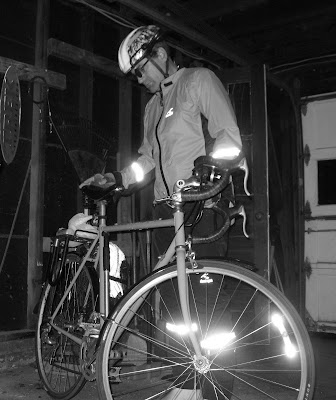 When I pulled out of the driveway and for the first 1-1/2 miles of my commute, not a drop of rain fell. I was a bit disappointed, but not for long. As I drew closer to work, the rain began to fall in veritable torrents. At one point - the heavy rain, flooded roadways and strong wind gusts combined to push me off the road, where I ended up locking the brakes and almost doing an endo. Thankfully, I was able to get my foot down and not so gracefully get both wheels back on the ground. A little shaken by this mishap, I slowed down and rode the rest of the way to work more cautiously.

As eventful as my morning commute was, it was nothing compared to my ride home that afternoon. Steady, heavy rains fell all day and continued to fall as I headed out to my bike late that afternoon. The drainage systems of the city were overburdened and simply not able to keep up. More than once I had to gingerly navigate through small lakes that had formed. It was one of these "lakes where there should be no lakes" where my judgement faltered. I was passing through Huntington park and came upon a section where the road disappeared underwater for a stretch of 30 or so yards. Without a second thought I rode on. It wasn't until I was a third of the way through and noticing that my hubs (I ride 700C wheels) and bottom bracket disappeared underwater, that I realized that maybe my secretary was onto something. At this point I was already committed, I stood on the pedals and pushed with all my might to keep up some semblance of forward momentum until I reached the far shore.

I made it home safely, but now I have the unpleasant task of overhauling my hubs and drivetrain.
Posted by Paul at 7:00 AM