I woke well rested and relaxed on the third and final morning of my micro tour. It was chilly, but nothing like the day before. I put some water on to boil in order to enjoy a couple cups of coffee.

As I sat sipping my coffee and watching the sun rise, there were two things that occupied my mind. First - I was hungry. Second - I was tired of oatmeal. This second thought was a bit troublesome. Part of the purpose of this tour was to experiment with foods I would bring along on my Blue Ridge Parkway tour next Summer. My plan was to have oatmeal for breakfast every morning. Yet - here I was tired of oatmeal and this was only my second morning having it. How in the world was I gonna eat it for 7 straight mornings.

There is one important fact about me that my dear readers need to know and tuck away. I am not fond of oatmeal. I refrained from using the word hate - but not by much. For breakfast - I'm an eggs and sausage kinda guy. I don't want no stinking oatmeal. I'll let my food dilemma go for now and pick it up in another post specifically dedicated to discusssing the pros and cons of my food experiments. For nor let it suffice to say that I wasn't in the mood for oatmeal and that was that.

After a couple cups of coffee, I broke down camp, loaded the bike and rode out in search of more substantial food.

I rode 8 miles to the Jamestown Settlement visitor center. 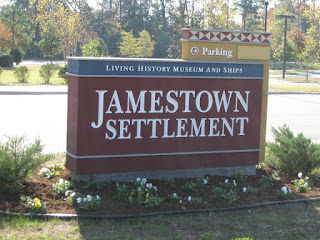 One of the exhibits that always captures my attention here is the 50 flags poles proudly flying the flags of all the states. At the base of each is a plague detailing when that particular state became a part of the US. As I pulled into the parking lot this day, those flags particularly caught my attention in that they were all at half staff. I was reminded that this was the weekend immediately following the Fort Hood Shooting. 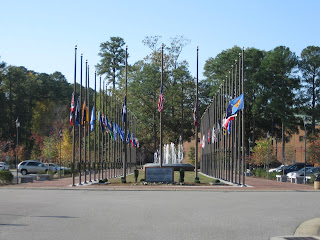 Then I went inside the visitor center and straight to the deli. I grabbed a sausage and egg biscuit and corn pops. Ah - now that's what I call breakfast.
Posted by Paul at 5:40 AM