Even though I have all the components, I can't start assembling the bike together because I still have to paint the frame. Unfortunately, the weather isn't cooperating, so that task is on the back burner. In the meantime though, there is some amount of sub-assembly that I have been doing:

Cranks:
The Shimano 105 cranks, I salvaged from a bike a friend of mine gave me when, after repeated crashes, he decided to give up the sport. They are 172.5 mm long (just my size) but are outfitted with double chain rings (53 and 39 tooth). 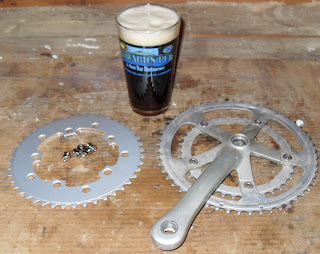 (Note: What be that in the middle of the picture? Why bless my soul - I believe it to be a pint of Legend Brown Ale.)

For the Roadster, I want a single chainring so I took both of the old chainrings off and installed a 44 tooth ring. Since I am only using one chain ring, the original chainring bolts are too long. That's why I bought single stack (shorter) ones when I bought the 44 tooth ring. Once the new chainring was firmly in place, I attached the pedals and wala the cranks are ready for final installation. 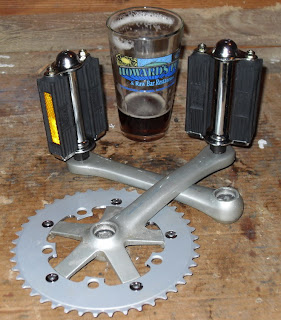 Wheels
I am using Shimano RX100's hubs that I also salvaged from the bike my friend gave me. They have practically no miles on them, but they have been sitting around my garage for several years. During that time the grease has degraded and gummed up. So I took them apart, cleaned them, repacked them with fresh grease and reassembled. I then took the finely tuned hubs and the new Weinmann rims down to BikeBeat to have Rodney build me a set of wheels. 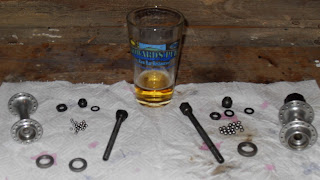 (Note: The color hath changed in the pint glass - Why I believe it to be a bit of good ole Bud Light.) 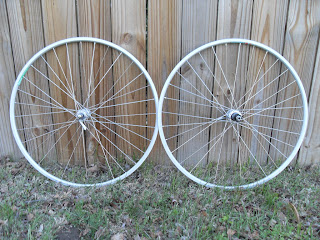 Handlebars:
It was now time to turn my attention to the handlebars. To me the most important part of the bike, for they provide the window through which I gaze. I removed the stem from an old pair of drop bars and attached it to the North Road bars. I slipped on the grips, attached the brake levers and then attached the new, shiny perfectly tuned brass bell.

(Note: The Legend Brown Ale kept calling me, so I went back for more.)

Now for the final bit of sub-assembly - The seat. I unpacked the new Brooks saddle and lovingly coated it top and bottom with Brooks Proofhide. I left the bottom as coated but polished the top once it dried. I then attached the seat post and now the sub-assembly phase of my bike building is complete. 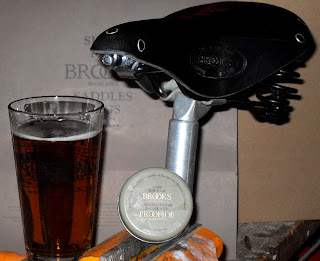 (Note: Why that be a different color altogether - hmmm - Yuengling Lager it be.)
Posted by Paul at 7:20 PM