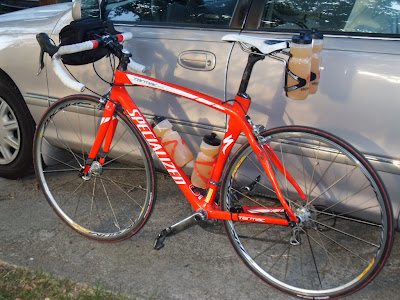 We like to think that we have control of our lives. The fact of the matter is, we are pawns in the hands of life. Case in point: I resolved to ride a century per month from May - Oct. I had not yet ridden one in June. It was the last Sunday of the month. As I sat at the dining room table, sipping on a fresh cup of coffee, I could have thought of at least a dozen things that I would like to do. However, deeper down than the coffee that surged through my veins, I knew there was but one thing on my plate this day. I had to ride a Century.

At 7:30 am, after barely 2 cups of coffee, I pulled on Lycra and headed out to the garage. Due to my procrastination, I missed all the organized rides in June. This century would be a bare bones - no nonsense - solo affair. 1 man - 1 bike - 4 water bottles - 100 miles.

I rode East for about 8 miles, stopping at a McDonald's just outside of Poquoson. I clip-clopped inside and ordered hot cakes and sausage along with a cup of coffee to wash it down. As I ate breakfast, a middle aged man with a Livestrong band on his wrist came in with his family. He came over to my table and said - "wow man, 4 water bottles, how far you planning on riding?" "A hundred miles", I unenthusiastically responded. He went on to tell me that in May he rode his 8th MS 150 in which he rode 2 consecutive centuries. I refrained from retorting that it is one thing to ride 100 miles with hundreds of other people, it's quite another to face it with no other company than one's own thoughts.

As I finished my breakfast, my last human contact of the day was an elderly couple that approached my table. The man pointed out that my shoes made me walk funny. I pretended not to notice his eyes glaze over as I embarked on a detailed pontification of the functionality of clipless pedals. After that one sided technical exchange, they invited me to their church, where a group of members are avid cyclists. Maybe I will check it out some day.

After breakfast, the ride started in earnest. At the 25 mile mark, I found myself in Yorktown. Without even stopping, I pulled onto the Colonial Parkway and headed for Williamsburg. At the 38 mile mark, I stopped in Williamsburg for a potty break. There must have been some kind of war enactment going on, cause the colonial area was transferred into a city of tents. Troops, all dressed in wool and wigs were all around. I was sweating profusely in lycra, I can't imagine their discomfort.

I snacked on a pack of GU energy gel and rode on. Getting back on the parkway, I headed for Jamestown, where I stopped only long enough to savor another GU and then headed back to Williamsburg. I arrived there around 11:30 with 56 miles under my belt. My initial plan was to stop there for lunch, but I was warmed up, feeling good and the thought of stopping, cooling down, eating a big lunch and getting back on the bike, was not an appealing one. I rode on. I got back on the parkway and rode towards Yorktown. In Yorktown, I emptied my bladder, savored another GU, refilled a couple bottles and continued on my way.

Between Yorktown and Newport News, the hunger, fatigue and boredom began to set in. I was not having a good time. I reached for another GU and washed it down with water. After 5 or 10 minutes, I began to feel better.

I arrived back at my house with 87 miles complete. I stopped long enough to let the dogs out to potty, surf the net and switch to my Bike Friday. I even thought about drinking a beer. For those readers who are thinking about doing a solo century, allow me to give you these words of advice. After 87 miles - DO NOT STOP - DO NOT LET THE DOGS OUT - DO NOT SURF THE NET - and for God's sake - DO NOT EVEN THINK ABOUT DRINKING A BEER!!! When I got back on the bike, after nearly an hour of docile activities, I possessed not a shred of physical, mental or emotional energy in my body. Those last 13 miles were pure "H - E - DOUBLE HOCKEY STICKS".