With What Am I Gonna Do It

Ok, I've talked about what I'm doing and how I'm doing it, so now let's talk a little bit about gear. 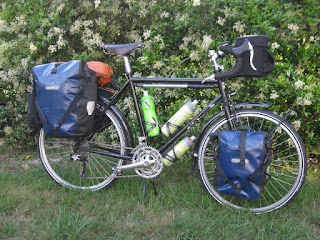 I'm not going to cover all my gear in excruciating detail, maybe I will do that at the end after I've paired down my gear to what I really need.  I am reminded of a bike tour I did in upstate New York. After the second day, I was so desperate to shed weight that I was squirting out toothpaste from the tube.  On the third day I stopped at the first post office I came to and shipped a buttload of stuff home.  I'm hoping I've learned something from that experience and have been trying to keep my gear to a minimum, but I suspect I still have too much.  We will see!

Bike - the most essential part of my gear is of course my bike.  I have a Surly Long Haul Trucker that I bought a few years back.  Its  been my commuter bike and has performed perfectly, but it was in need of some TLC.  I stripped it down and overhauled it from the bottom up.  I changed out most of the components, the most significant changes were:

Stuff Inside The Bags - this is where I will spare you the long list.  At a high level...
So there you have it, the stuff I will be using to get across the country.