Blondes on The Bow

One of my favorite bike rides begins on the west bank of the James River and traverses 80 miles of rural roads through Smithfield, Surry, Jamestown, Williamsburg, Yorktown and back to Newport News. I was midway though this glorious ride on an equally glorious day as I rode upon the Jamestown Ferry. This ferry is a 30 minute ride across the James River from Surry to Jamestown.


As I boarded, the attendant, deckhand, ferry person (whatever you call them) directed me to the starboard rail. I dismounted, leaned my bike against the rail and leaned against the same as close as I could get to keep from being crushed by the following stream of cars. It was a busy day, so they were packing them tight.

As the ferry pulled away, I caught a glimpse of the western shore. It was a sheer cliff of red clay rising majestically above the surface of the river.

I glanced south and pictured the direction from which John Smith had sailed more than 400 years earlier. 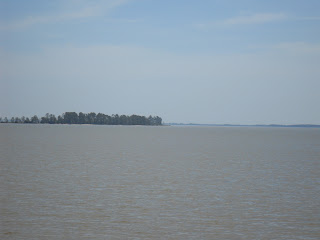 I glanced east and saw the Jamestown monument marking the first permanent English settlement in 1607. 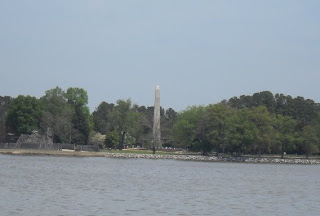 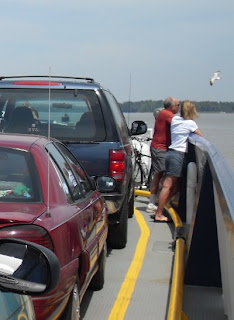 That's right, a girl. Not only a girl, but a blonde. She was wearing a blue jean skirt and leaning against the rail some 40 feet away. She was talking to a cyclist and that cyclist wasn’t me. He was an old fart, with thinning, gray hair and a pot belly, riding a hybrid. For God’s sake, he was old enough to be her grandfather (of course I was old enough to be her father, but that ain’t the point). This old geyser had the unfettered attention of a blonde bombshell; while I, a handsome, middle aged hunk of a man, with an amazing physique, clad in sexy lycra, riding a super light, super fast carbon fiber bike, was left hugging the rail.

I was tempted to mosey to the bow and butt in, but my bike was leaning precariously against the rail and I dared not leave it fearing it would fall over into one of the cars squeezed but inches away. As with most of my encounters involving the fairer sex, I was a day late and a dollar short. All I could do was stand there and for the next 30 minutes resent the fact that this old fart had the unfettered attention of this drop dead gorgeous blonde.


I was comforted by but one fact. When this ferry docked on the east bank and this blonde drove away in her SUV, I would blow by this old fart so fast that my draft would literally pick him up and fling him off the road and into the river to drown. As the ramp lowered and the last car departed, leaving us two cyclist (one – a pot bellied old fart with thinning, gray hair on a 50 lb hybrid / the other – a younger, handsome, rock solid hunk of lycra, riding a 20 lb carbon fiber racing machine) we departed.


Imagine my incredulity and shame as I was left in his dust. Breathing hard, with my heart rate maxed out, I watched helplessly as he rode away from me and disappeared in the distance. Just before I lost sight of him, I was tempted to undo the straps of my helmet and tip it to him. It turns out that blonde had made the right choice. She had picked the better man.
Posted by Paul at 6:15 AM