"Hey! Get that Grandma bike out the way!!" Those were the words that pierced my ears as a co-worker and fellow commuter shot past me on my morning commute to work. I'm not sure which one was worse - he insulting my bike or me? Truth be told, I don't think it's possible to separate the two!

As he pedaled away in the distance, I reached down and gently patted the top tube and soothingly said, "don't listen to him, he's an idiot."

Then I got to thinking. OK, fair enough, she's not the fastest steed on the streets. The fact of the matter is, she's not built for speed. She's built for efficiency, comfort, functionality, flexibility, and practicality. In those realms, she reigns supreme. The fact that she's drop dead gorgeous, well that's just a bonus!!

For all you guys and kinky girls out there - you can look - heck, you can even lust - but don't touch - cause - she's all mine!! 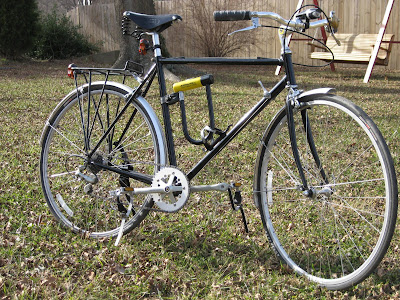