My first century of the year is in the books. 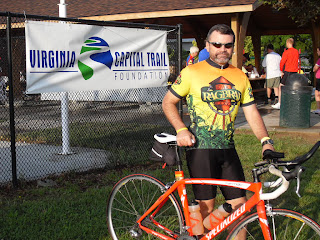 On May 9, I participated in the cap2cap Century which serves as a fund raiser to support the Virginia Capital Trail Foundation for a bike trail being constructed between Williamsburg (the old capital) and Richmond (the current capital). I picked Steve up at 6:00 am and we drove up to Chickahominy Riverfront Park just outside of Jamestown. This was the southern start. There was a simultaneous start up in Richmond. The weather was calling for a pretty good chance of showers, so Steve and I did the remaining 1398 riders a big favor by packing our rain jackets. This single act of selflessness was a near guarantee from God that not a drop of rain would fall.

We had a police escort as we started on Route 5 and crossed the bridge over the Chickahominy River. Once we reached the northern bank of the river, that was the last I saw of the police escorts. We were pretty much on our own after that as we made our way North on lightly traveled country roads.

The organizers did a pretty good job of having rest stops every 10 miles or so. My only complaint about the rest stops was the minimal variety of food - crackers, bananas and dry bagels. By the end of the day - I would have killed for a peanut butter sandwich and I don't even particularly like peanut butter.

As we left the Charles City County rest stop at the 20 mile point, we rode along with a fellow from Williamsburg. I think his name was John. He was an Army officer, about my age. we talked about bike touring with our sons, riding in France and an assortment of similar topics. While these topics were interesting, what really captured my attention was his backside. Now now, don't jump to conclusions, I was talking about his saddle. He was riding a Brooks B-17 Special, complete with hand hammered copper rivets and copper plated rails. It was a work of beauty. I asked him how he liked the saddle. His response captivated and intrigued me, "it is like a companion!" At that point, I knew I had to have one.

Being so early in the year, Steve and I were not in tip top shape, so we agreed to ride at a relatively slow pace of between 16 and 17 mph. We kept to this pace all the way to Richmond. I was looking forward to the mid point stop and more substantial food. Imagine my dismay when the menu offered - crackers, bananas and dry bagels. I snapped a few pics and we were heading back to Jamestown and the advertised after ride lunch. 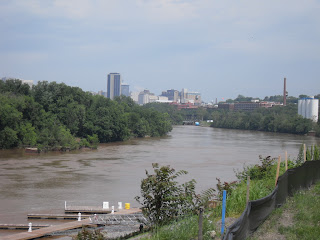 As we left Richmond, I felt a few drops of rain (not even enough to get us wet), but then it stopped and the remainder of ride was precipitation free. A large portion of the ride back was on Route 5. I can't say I was particularly thrilled by that. There isn't much of a shoulder on Route 5 and the cars zoom by real close in excess of 55 mph. On the plus side, it is a pretty direct route back to Jamestown and we had a nice tailwind.

At one point, while we were on Route 5, we passed this couple riding their hybrid bikes. They were going all of 5 mph and get this, they were riding side by side. The cars were coming up behind them, like I said at 55 mph, and had to go all the way into the oncoming lane of traffic to get around them. As we passed them, they looked like they were on a leisurely Sunday ride, completely oblivious to the fact that they were on the verge of becoming road kill at any moment. I sped up to get past and away from them as fast as I could. I didn't want to be collateral damage to their catastrophe. I swear, some people have no business on bikes!!

About 10 miles outside of Richmond, Steve and I hooked up with John again. He was pretty much going our pace and we rode in a pace line for quite some time. I was really starting to feel very good. The more miles we logged in, the stronger I felt. About 20 miles from the finish, another rider joined our pace line and we really started to move. I was out front, got in a zone and must have lost track of my speed because after 10 or 15 minutes or so, the new rider, who was right behind me said, "I would like to pull through, but it is all I can do to stay on your wheel." I sat up and looked back. Steve and John were no where in sight. I had inadvertently dropped them. Oh well, there was only another 5 miles or so to go to the finish, so I reached for the drops again and hammered. I really felt good. I had just finished riding almost 100 miles and here I was tooling along at 20 mph.

At the top of the bridge over the Chickahominy, I stopped and snapped a few pictures and waited for Steve and John. The ride finish was just at the foot of the bridge. After a few minutes, they came along and we finished the ride together. I was extremely happy with my performance and I was starving to death. 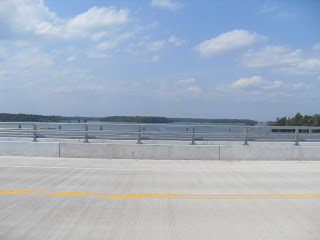 I couldn’t wait to put away the horrid images of crackers, bananas and bagels and sink my teeth into some real food. To say I was mildly disappointed when I got in the lunch line and they were serving wraps with cold cut meats, is an understatement of astronomical proportions. I didn’t have much choice, so I woofed it down and asked Steve if he was up for a cold beer. We stopped at the Green Leafe Café in Williamsburg, sat at the bar and I sipped contentedly on a nice wheat beer.

A long ride – a good friend – a cold beer – one can hardly ask for a better birthday present than that.

PS – the following week. I went to Harris Cyclery and bought a Brooks B-17 Special, complete with hand hammered copper rivets and copper plated rails. I’ve been lovingly treating it with Neatsfoot and Mink Oils. In the future when people asked me how I like it, I already know how I’m gonna respond, “it’s like a companion!” 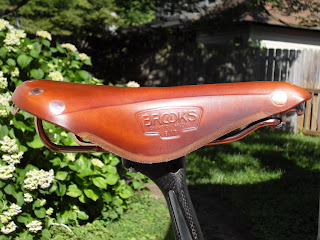