This past Friday night, I participated in a special Critical Mass ride in Norfolk. It was special in that we set up a couple Ghost Bikes in memory of two cyclists who were killed in the past year. I would like to personally thank Wes for setting this whole thing up.

We gathered outside Blair Middle School in Ghent. I had never participated in a Critical Mass ride before and I wasn't really sure what to expect. The riders came from all walks of life and were riding all manner of bikes. They were riding road bikes, fixed gear bikes, mountain bikes, hybrids and beach cruisers. It was an awesome group.

Wes arrived around 6:00 PM pulling a bike trailer with the two Ghost Bikes. We struck out on Colley Ave and made our way to Grandby. It was so strange to be taking over an entire lane on these busy streets. We weren't but 40 or so riders, but we were enough to be a "Critical Mass". I now understand how powerful this whole movement really is. There were a couple drivers that were pecker heads and honked their horns in frustration, but the vast majority were courteous. We even had several folks pull alongside and inquire as to what we were all about.

We rode for 5 or 6 miles to the intersection of Bayview and Tidewater Drive. We pulled into a 7-Eleven on the corner and there set up the first Ghost Bike. 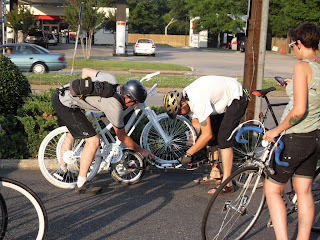 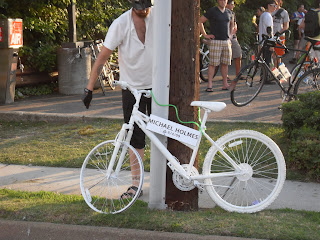 From there we rode a couple 2 or 3 more miles and turned left onto Little Creek and a little ways down set up the second Ghost Bike on the corner of Little Creek and Meadow Creek, near an Advanced Auto store. 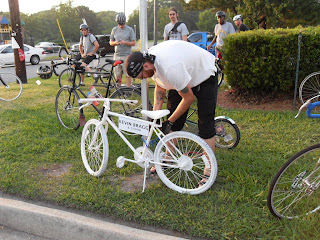 We then meandered through the streets of Norfolk and made our way back to Ghent. It was nearing dark by the time we completed the ride. As we all straddled our bikes in the parking lot - I pondered this ride. We had only ridden 17 miles. It had only taken a couple hours. There were only a few dozen of us. Yet, I couldn't help but think that we had done something meaningful. We made a small difference. I believe we sent a message to quite a few drivers that hopefully changed their perception of and attitude toward cyclists.
Posted by Paul at 5:55 AM