The day before yesterday - Santa Claus came to town. 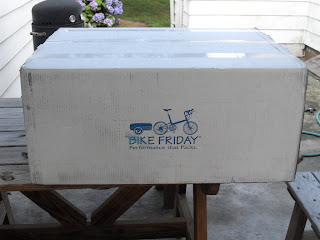 My first thought was, "Wow - somebody's been a good boy this year." Then when I peaked inside and saw the nameplate attached to the frame - I realized that good boy was me!!! 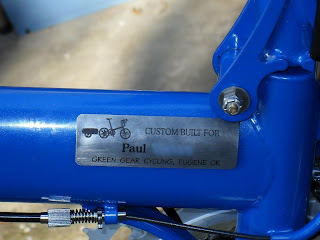 The new love of my life, my Bike Friday - New World Tourist, had finally arrived. I carefully unwrapped her. When I first opened the box, I saw but a jumbled mass of bike and parts. I thought to myself, oh boy, this will take a while. So I went to the fridge and opened a beer. 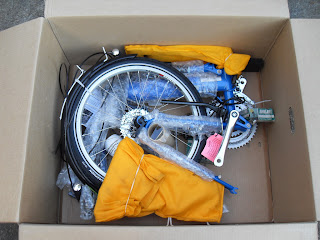 But, I was pleasantly surprised with how easy the assembly was. Behold as she comes together: 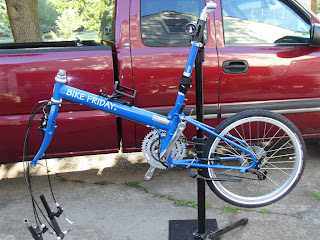 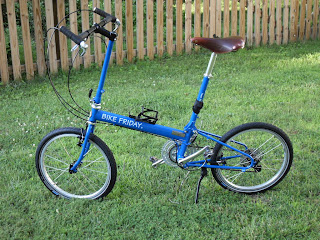 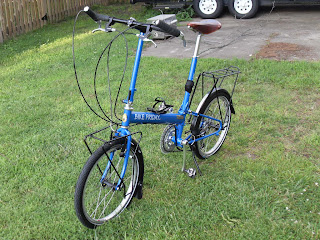 By the time I finished, it was getting late in the day, so I only had time to take her for a quick ride in the neighborhood. Then I parked her, grabbed another beer, sat down and admired her. We didn't say much, but more or less, felt one another out. We would become better acquainted later. As with any meaningful relationship, getting to know one another is not a destination, but a journey.

The following day, I dressed up for the occasion (all in lycra), filled a couple water bottles with champagne (GU2O) and our journey began. I wasn't 1/4 mile from the house, when I knew this was going to be a long and fruitful relationship. She rode like a marvel. I had her sized to match my road and fixed gear bikes and that is how she felt. I stopped every so often and tweaked the seat and handlebar height until we fit like a hand in a glove. We rode a blissful 20 miles. She isn't quite as fast as my Specialized, but that's OK. I didn't buy her for speed, she's built for long distance touring and for that, she will do just fine. 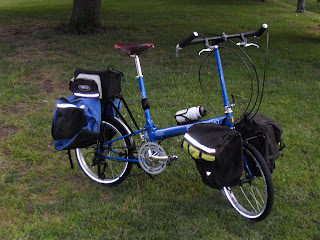