On the first night of our trip, as I mentioned in an earlier post, I was aiming for a campsite that was completely remote. I managed to accomplish just that.

It wasn't until we were unpacked and the camp set up that I came to the realization of a serious tactical error. When we went through the last town, some 5 miles back, I failed to pick up any beer. For those of you who have followed this blog for any length of time, I know you think I'm pulling your leg. I can assure you that I may joke about a lot of things, but never when it concerns beer.

A small saving grace in this utterly despicable situation is that I managed to tuck into my panniers a couple of beers from the night before. They were warm, but given my current plight, the best beer on the planet. 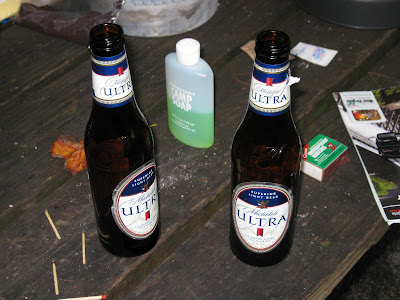 As I finished the second and final beer is when the relationship between myself and my fellow touring companions was strained for the first and only time on this tour. I calmly asked if they would be willing to ride to the nearest town and buy me some more. A request that they simultaneously and summarily rejected as ludicrous.

- Never mind that I had spent the last two weeks planning out every detail of this tour.

- Forget the fact that I bought and prepared all the food.

- So what that I helped them each select the proper bikes and outfitted those bikes with MY racks and panniers.

- Who cares that I had brought all of my vast experience and resources to bare so that they might have an awesome, trouble free weekend.

I uttered no complaint, all my efforts were but a labor of love. Now I make but one simple request of them and they trample it under foot with a reckless disregard for my selfless sacrifices.

The degree of their self centered attitude was truly manifested the following morning when a scant 3 miles down the trail we happened upon this establishment. 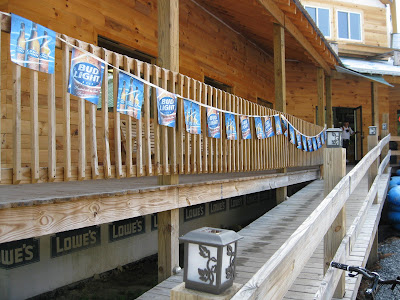 For the normal person, the pang of guilt upon such a discovery would have been incapacitating. However, Ray and Buck are obviously not normal people, cause despite my protest and eloquent articulation of their self-centered, shameful behavior, they displayed not a morsel of remorse.

A lesser man than I would have let spite eat away at the essence of who they are, but I chose on the other hand to use that negative energy for good. I spent the predominance of the remainder of that tour pedaling and mulling over in my mind an idea for an "instant beer". A concentrate of sorts that by simply adding water could be converted into that most lovely beverage among beverages - beer. I'll save the details for that idea for another post. Suffice it to say for now, I think I'm on the cusp of discovering something that will not only make me independently wealthy, but even more importantly, will be my contribution to the betterment of mankind. My legacy.

To think that this awesome gift to mankind was born because a humble, simple and selfless man (i.e. ME) refused to let the self centered act of his companions (i.e. Ray and Bob) make him bitter, but instead make him better. As a result future generations of mankind, no matter where they find themselves will be able to enjoy the unbridled ecstasy of GOOD beer.
Posted by Paul at 4:55 AM