From Washington's Headquarter, I jumped on the Newport News Park Bikeway and rode it around to the campground.

It was mid-afternoon and knowing it would get dark early I set about getting things together. The first order of business was to comb the campground and gather as much firewood as I could find. That being done, I set-up my tent and unrolled my ground pad and sleeping bag. Next I began to make preparations for dinner. One of the goals of this trip was to experiment with my different meals. I'll talk more about that in a separate post. Suffice it to say here, that one of my goals was to cook my dinners using a single pot. Tonight I would have spaghetti with red sauce and pepperoni. 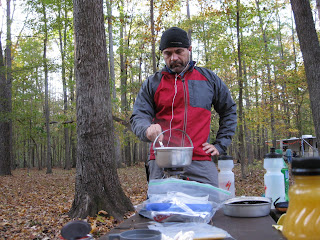 By the time dinner was done and all the dishes clean, darkness was descending. I started a fire with my meager supply of firewood. Once the sun went down, it was amazing how cold it got and how quick it was in getting there. I boiled some water and made a cup of hot cocoa and stood as near the fire as I could. Slowly sipping the hot drink and surrounded by the warm glow of the fire, my world had truly become small and cozy. Just the way I like it.

Unfortunately, it wasn't long before the drink and firewood were deplenished and the cold was immediately there to remind me of the bigger and crueler world around me. It was dark. It was cold. The fire was dying. I had no place to sit. Though it was still early (7:00 PM), there was but one choice left to me, climb in my tent.

I put on sweat pants and a couple shirts and climbed into my sleeping bag. I took out my Ipod Touch on which I had downloaded the Kindle App. I starting reading "The Worst Journey in the World". This is a true story about a group of British explorers in the Antarctic. They were trying to be the first to reach the South Pole" As I lay there in the warmth of my sleeping bag, I thought about how apropos it was on such a cold night to be reading of such an adventure. The trials I would encounter would pale in comparison to what these brave men went through and the price they would ultimately pay.

I read for an hour or so and my eye lids grew heavy. I turned off the Ipod, slid further down in the sleeping bag. My world had become small and cozy again. I smiled and fell fast asleep.
Posted by Paul at 6:00 PM