If bikes could talk, oh the stories they could tell. Take this bike for instance... 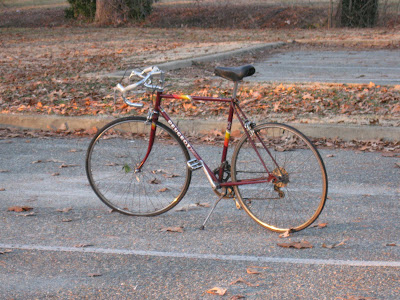 I first saw it on my ride home the previous night. I was riding through a park, when my peripheral vision caught a glimpse of it on the perimeter of the glow of my headlight. I only saw it for an instant, but was immediately struck by the oddity. It was parked, exactly as it sits in the above picture - all alone, in the pitch black of night, pulled into a parking spot and resting on it's kickstand. What was it doing here? Where was the owner? That evening I was tempted to turn around and get a better look, but it was dark and in an isolated part of the park - I was tired, anxious to get home and not particularly inclined to being mugged in the event it's rider was of ill refute. I kept riding.

The next morning, on my ride to work, I was surprised to see the same bike, in the same spot. I was tempted to turn around, but was running late. I kept riding. That same afternoon on my ride home, there it still sat. Now my attention really peaked. It was daylight, I was in no hurry and I had no where to be or go. I stopped riding.

It was an old Peugeot that had certainly seen better days. It's chain was black with grease and grime. It sported steel rims that were rusted and while I did not spin them could tell were far from true. The handlebars were unwrapped and exposed. The tires were thread barren and the front one was flat. This bike had been around the block a time or two and was most definitely in need of a little TLC.

If bikes could talk, this would be one whose old, rusted wheels I would sit at and listen intently to it's tale. How old was it? How many miles passed beneath it's wheels? What was it's top speed? What paths had it taken? How many riders had it known? I would most certainly hear stories that brought a smile and still others that caused me to discreetly wipe away the tears that involuntarily trickled down my cheeks. In the end, I would be forced to bid this old steed farewell and hopefully walk away a better bike rider for having made it's acquaintance.
Posted by Paul at 5:15 AM