Riding a bike back and forth to work gives one lots of time to think. For the most part, that's a good thing. If your not careful though, you can find your mind wandering to some pretty strange places.

Case in point. The other day I was riding home from work and happened upon this... 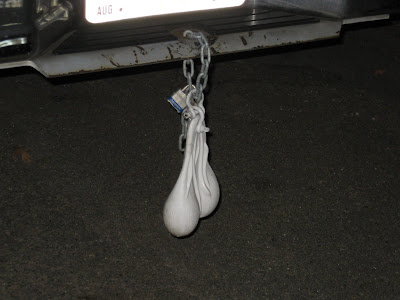 This got me to thinking. Would I ever consider hanging a pair of "bull balls" from my bike. Upon further consideration I came to the conclusion that "bull gonads" and "bike riding" are actually diametrically opposed. I guess that's why you never see bulls riding bikes. It's not because they don't have hands to properly grip the handlebars. This puzzle is not solved by the fact that they don't make helmets with holes designed for horns to stick out of. The answer to this mystery lies not in the reality that they don't make "bull shoes" much less ones that integrate with clipless pedals. There is but one - correction - two reasons that bulls don't ride bikes and they can both be found lying gently in the nether region.

Furthermore, If in the unlikely event I felt obliged to supplement my masculinity by hanging a pair of bull nuts from my bike, I certainly wouldn't choose an injection molded plastic version that you buy at a nickel and dime store. No - if I were to embark upon such a desperate path, it would be the BIG BRASS version for me. Yea - I know - they are more expensive. Yea - I know - they would be added weight. But - come on now - we are talking about my manhood after all!! Aren't we??