I Have To vs I Want To

This past Tuesday, I drove my truck to work for the first time in almost a year and a half.

It was raining, but I've ridden in far harder rain.

It was cold, but I've ridden in far colder temperatures.

The reason I drove is far more complicated. It all started with this... 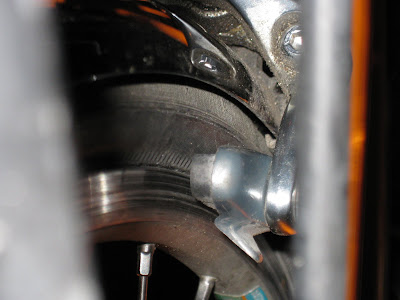 ...rubbing brakes. For the last couple weeks I've been having trouble with my wheels rubbing against my brakes. The previous night, I decided to rectify this situation in preparation for the upcoming commuting week. When I put these new brakes on my bike, I realized that I had to move the pads all the way to the very end of the arms to barely clear the tires. As the pads wore and became wider, they started to infringe upon the tire. I tried an assortment of adjustments to no avail, become increasingly frustrated and desperate in the process.

It was getting late, I was tired, cold and hungry, but I couldn't stop. I had to ride to work the next morning. My other bikes were either in the middle of preventative maintenance or remodeling, so they were unridable. This bike was my only option. It had to be fixed. I had to ride to work.

It was at this point that I stopped and considered my state of mind. Here I was, forgoing rest and food all because I had this perception that I had to ride to work. I started riding to work because I wanted to and now it had become this inward obligation. What was I trying to prove? Who was I trying to impress? I had become a slave to myself. That simply would not do. I dropped my tools, straightened up, turned off the light and walked out of my garage. "I'm taking the truck tomorrow", I said to myself. Not because I have to, but because I want to. It was time to break this vicious cycle of bike commuting out of obligation so that I could get back to bike commuting out of love.

When I got home that evening, in a much calmer state of mind, I switched back to my older brakes that had longer reach and the bike was ready for me to ride to work the next day. Not because I have to, but because I want to. I plan on making sure I keep it that way in the future.
Posted by Paul at 5:00 AM