Broken Collar Bone - Hanging on a Cross - I Don't Think So!

Did that title get your attention? Let me explain. I will playing Jesus in my church's Easter drama this weekend. 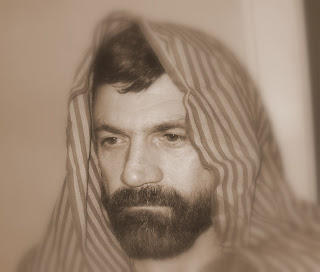 Being true to the Easter story, I will be crucified. At the end of rehearsal last weekend, the Director was encouraging the cast to get plenty of sleep, eat healthy, take care of ourselves and not get hurt. She got me to thinking about riding. I can count on one hand the number of crashes I've had in the last 20 years of riding - so the risks, in my estimation, are extremely low. That being said - the risks are not zero - I have crashed. A common injury in bike crashes is a broken collar bone. Hmmmm - suppose I crash this week - suppose I brake my collar bone - how will I hang on a cross? The answer - I wouldn't! Two months of rehearsals - two months of growing out my hair and beard - all for naught. Furthermore - this isn't a big production so I don't have a stand-in. An injury this week would not only jeopardize my hard work, but that of a lot of other folks as well.

I was torn - do I risk it and ride or do I sacrifice the ride to portray the "greatest sacrifice"? I decided on the latter. Two things occurred this week that confirmed I made the right decision. 1st - Lance Armstrong crashed and broke his collar bone. 2nd - It rained most of the week and I wouldn't have been able to ride much anyway.

The closest I came to commuting is portrayed below: 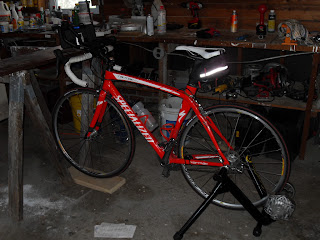 This was the view looking over my handlebars. 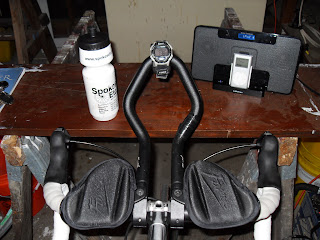 Doesn't that look like fun? I did a "virtual commute" to work on my stationary trainer 4 days this week. I have to admit - I hate riding the stationary training - it's too much like real life - you pedal your butt off, sweat like a pig, but don't get anywhere. That's OK though. My Easter morning this year will be this upcoming Monday - The beard will be gone - the hair will be buzzed - the stone will be rolled away - the tomb will be empty - I'll be back on my Fixed Gear riding to work.
Posted by Paul at 10:10 PM