I am starting to build another bike and since I now have a blog, I thought I would take you with me. In the description of my blog I refer to it as "looking over my handlebars and telling you what I see." Well - this series of blogs will be more like "looking over my workbench..." I will be building what I call a modified "Light Roadster". Sheldon Brown, in an article on The Golden Age of 3 Speeds describes this style of bike as:

"Roadsters were the old-fashioned style of bicycle popular in the countryside. They usually had 635 mm (28 x 1 1/2) wheels with westwood rims, long cranks and long wheel bases, and very shallow frame angles (68 degrees or less.) Roadsters used "roller-lever" brakes operated by rods, instead of cables. The typical roadster would also be equipped with a"gear case", a chainguard that completely enclosed the "chain".

Sports or "light roadster" bicycles were the basic transportation of the urban working class. They feature 590 mm (26 x 1 3/8) wheels with Endrick or Raleigh-pattern rims, full steel fenders (or "mudguards" to the British) "North Road" upright handlebars, and cable-operated brakes. Sports bicycles had rather more nimble frame geometry, typically with 72 degree frame angles. These bicycles were faster and lighter than roadsters. The vast majority of English bicycles that made it to the United States fall into this category.

I found this picture of a 1970's model Raleigh sports roadster in Wikipedia. 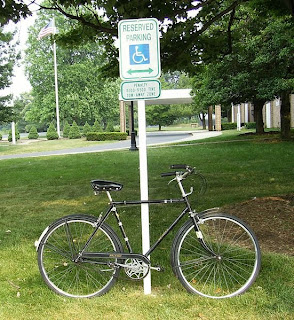 My version of the "Light Roadster" will be similar to the classic version with a with a few twists. I will be using an old Bianchi steel frame (that I will be repainting). Similar to the traditional "Light Roadster", it will have fenders, North Road handlebars, three speed style grips, pedals and a leather saddle. However, instead of a three speed hub, I am opting for an 8 speed cassette and rear derailleur. I'll also be using 32 spoke, 700 mm aluminum rims.

Stay tuned over the next few weeks as this bike becomes a reality.
Posted by Paul at 7:39 AM