After my hugely successful ride on Day 1 in Seattle, I pushed my bike out of the motel on Day 2 with a lot more confidence, a little better idea of where I was going and excited about what I would discover.  On my first day I explored the Northern part of the city.  On this day I would venture to West Seattle.

Studying a bicycle map on-line, I concluded that there was a bike path that would take me to the West Seattle Low Level Bridge where I could ride over the river.  I rode from the motel down, down, down to the waterfront and sure enough found the bike path which I confidently took to the South.  I rode for a mile or so before I discovered that the trail was closed due to road construction.  However, my dear readers, do not lose heart.  I am in Seattle, and wouldn't you know it, they have bike detour signs that take me on an alternate path around the construction.  Can you believe it - BIKE DETOUR SIGNS - How cool is that???

The road leading up to the Low level Bridge was lined bumper to bumper with Semis making their way to the shipping terminal. 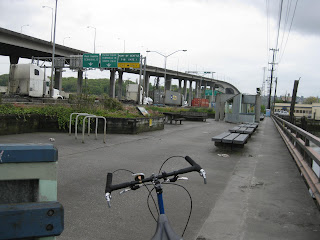 As I approached the intersection of the bike path and the never ending line of trucks, they miraculously stopped and allowed me to cross.  There was no light giving me the right of way.  There was no crossing guard directing traffic.  All there were was a bunch of courteous truck drivers willing to share the road with me, a measly bike rider.  To say that I am not use to such royal treatment is an understatement of astronomical proportions.

I reached the bridge and there was a nice, safe separated bike path to lead me across.  Upon reaching the opposite shore, I simply followed the signs for the Alki trail. 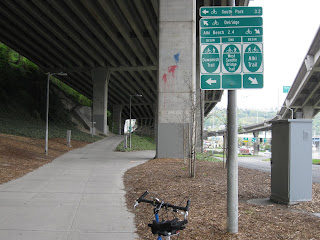 The Alki Trail took me on a pleasant and scenic path around the entire perimeter of the West Seattle peninsula. 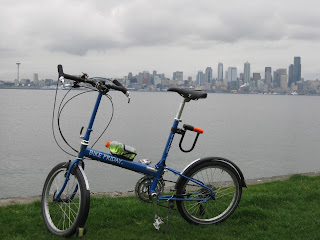 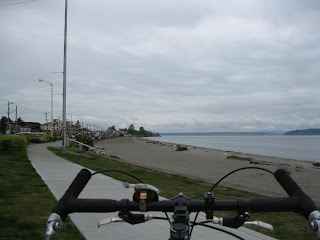 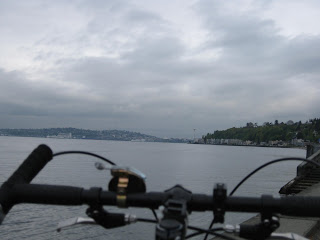 After navigating the perimeter of West Seattle, I ventured inward on the peninsula and climbed (another major understatement) to get a birds eye view of downtown Seattle. 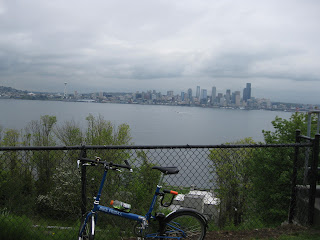 After enjoying the view, I flew downhill and made my way back to the motel which once again entailed a nut buster climb.  I was starting to get the hang of this city thing!!!
Posted by Paul at 7:50 PM