My conference ended around 4:00 PM and I ventured back to my room, looked out my window and got the first glimpse of the day. To my surprise and utter joy, the sky was clear and the sun was shining bright. Without a moment to lose I ripped of my business attire and donned my cycling gear. I grabbed my bike and headed outdoors.

Earlier I studied the Seattle Bike Map and discovered what looked like a good long trail in the Northeast part of the city. It was gonna be a bit tricky to get there so I scribbled a few directions on a scrap of paper and tucked it in my jersey.

I rode once again down to the waterfront, hopped on the Elliot Bay Trail, took the Ballard Bridge across the Salmon Bay and soon found myself on the Burke-Gilman Trail.  I was not alone.  The trail was teeming with activity.  There were tons of people walking, lounging under trees, sitting in the sun, on park benches, kayaking in the adjacent Lake Washington Ship Channel, rowing teams out practicing and bikes - my goodness - there were bikes of all descriptions, ridden by all manner of mankind.  There were so many bikes, going in different directions and traveling at different speeds that I really had to pay close attention to what was ahead and behind.  I was in my first ever, bicycle rush hour and loving every second of it. 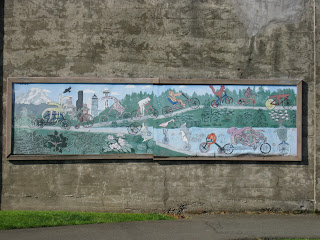 I rode this trail for as long as time would permit me, but not nearly as long as I really wanted. 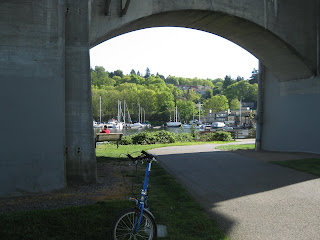 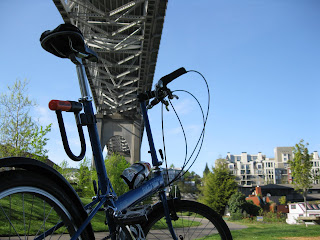 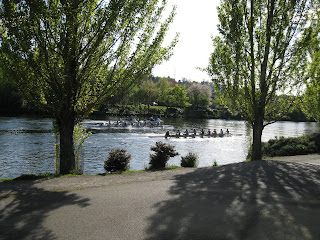 On my way back, I rounded a sharp curve in the trail and was struck with awe by what I saw... 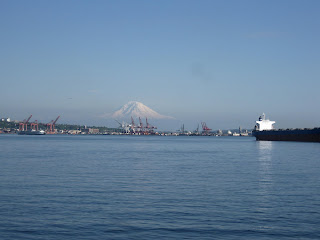 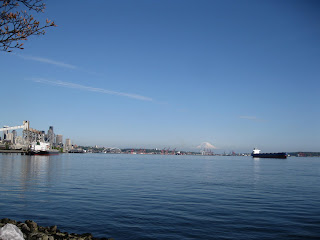 The mountain that had alluded me since I've been in Seattle.  The mountain that I rode in a car 100 miles to see, but never saw.  There she was - all white and majestic - dwarfing everything in the city.  To think - she was only a bike ride away!! 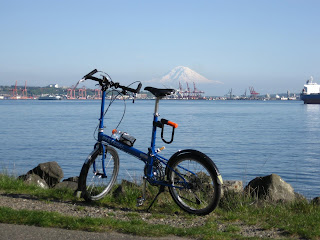