Due to travel and family responsibilities, I hadn't been on my road bike and done any serious miles in more than a month. This past weekend would be the weekend that I would change that injustice.

I came home from work Friday evening and made it perfectly clear to my wife that Saturday I was going on an 80 mile ride starting on the West side of the James River Bridge, riding up to the Surry ferry and crossing over to Jamestown, taking the Colonial Parkway through Williamsburg to Yorktown and finally traveling the back roads of York County home. As you can see, I had it all planned out. Then - my phone rang and I was obligated to go to work Saturday morning.

I didn't get home until around 1:30 on Saturday afternoon. Maybe the 80 miler was out of the question, but I was hell bent on getting some riding in. I ran in the house, pulled on the Lycra, grabbed a couple water bottles and headed out to my garage. I reached for my road bike and wouldn't you know it, the rear wheel was flat. Not to be that easily thwarted, I grabbed one of two spare tubes from my saddle bag and made short order of that flat.  Prior to leaving I made several command decisions.  First, I decided to leave the camera home, cause I was going to ride hard and won't planning on stopping to take any pics.    Second, I was leaving that dad-gum cell phone at home as well.

I pedaled away. It felt good to be riding. No camera - no cell phone - no stress. It was just me and my bike. I was free. I was independent. I was in control of my own destiny - until - I noticed that the rear of my bike felt a bit soft. I looked at my rear wheel and, much to my chagrin, it was flat.

Even with this set back, I did not lose heart. I had another spare tube. With well rehearsed motions, I quickly changed the flat and, using my CO2 charger, with a two second blast pumped up the tire to 100 psi.  One second later, the tire was flatter than before, thanks to the separation of my valve stem from the tube. It was at this point that utter despair began to gnaw at my innards. Here I was. 15 miles from home. No more tubes. No patch kit. No cell phone.

I was about a half mile from a main arterial road. With bike in tow, I clip clopped toward it in search of a pay phone.  I found not one, but two phone booths. I shouldn't have been surprised to find them both missing that essential piece of equipment that makes a phone booth a phone booth, a phone.   My grasp of control grew tenuous at best.

It was at this, my darkest hour, that I noticed the city bus sign. I rummaged through my saddle bag and to my utter joy, found my stash of emergency money. A few minutes later, the bus happened along. I put my bike on the front rack and climbed aboard. As I surveyed my fellow travelers, I immediately ascertained that I was the only person on the bus wearing spandex. Judging by the look on their faces, I appeared to be the only person to ever ride that bus wearing spandex. I took my seat and kept a weary eye on my bike. I expected at any moment to watch it bounce off the rack and hear the crunching sound of carbon fiber as it passed swiftly under where I sat. It would be the coup de grace.

When I finally pushed my lame steed into my driveway, I took care of the essential business first.   I reached into my frig and took out a cold beer.  Then I sat back and took the time to ponder a truly unbelievable ride, which did have one high point - I learned how to use the city bus, bike rack.  Too bad I didn't have a camera to record it. 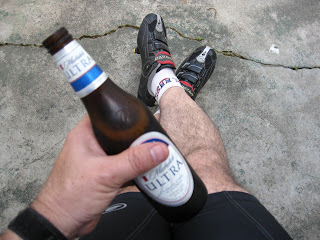