Our itinerary for the first night called for staying in one of the primitive camp sights along the trail. These sights were nothing more than a small space adjacent to the trail with a picnic table, hand pump for water and portapotty. We reached the predetermined camp sight and decided that we were on vacation and entitled to a little better accommodations (particularly flushing toilets, running water and hot showers). Therefore, we rode an additional 5 miles to the Brunswick Family Campground.

The was not my first time at this particular campground. In fact a number of years ago, when my 2 sons were young, we rode the C&O Canal Trail and stayed at this very same campground, for the very same reasons. On that particular occasion, I distinctly remembered that there was this entire family living in a tent. They weren't there just for the weekend. It was obvious that tent was their home. It was a big tent and they had rigged a blue tarp over it to increase its water resistance. Inside the tent they had a couch, recliner and TV set. It was really sad. Once the boys and I set up camp, I decided to go to the bathroom for a shower. As I was walking past their tent/home one of the little girls who lived there came riding by on her bicycle, and get this, she was singing "Santa Clause is Coming to Town". She was as happy a little girl as you could imagine. She lived in a tent and yet didn't have a care in the world. That little encounter happened many years ago, but the memory and lesson of it are still crystal clear for me today. In a material centric society like ours, where we spend so much of our life energy accumulating stuff, we would do well to heed this little girl's view on life. The roof over her head was a blue tarp. She did not have running water. She did not have AC. She did not have a bed. She did not have her own room. She had every reason to gripe and complain about her plight in life. Yet she rode around on a rickety, old bike, singing joyfully at the top of her lungs "Santa Clause is Coming to Town."

Being a Sunday night, the campground was pretty sparse, so Bob and I had our pick of sites. 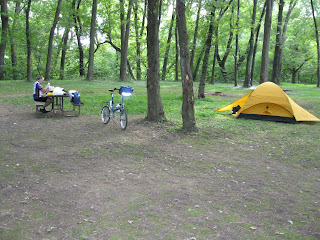 Once Bob and I set up camp, I emptied one of my panniers and we headed into town for supplies. Principally food and beer. When we got back with our supplies we were faced with a troubling dilemma. We had beer and no way to keep it cold. Bob went to get ice in the camp store, which was nothing more than the old trailer the campground owners lived in. He was gone for what seemed like forever. Just as I was about to go look for him, I saw him in the distance slowly walking his bike with a bag of ice tied down to the back rack and balancing a styrofoam cooler on the top bar. It turns out that the campground owners took mercy on our plight to keep the beer cold and dug in there trash pile and gave us this dirty, old, cracked cooler. On the open market, that styrofoam cooler wasn't worth 2 cents. To two touring cyclist with quickly warming beer - it was priceless!

With our beer happily chilling away, we set about cooking dinner. The menu for the night called for chicken jambalaya, cornbread and beer. There's a country song in there somewhere. As I cooked dinner, Bob busied himself setting up the table with a flair that would rival a 5 star restaurant. 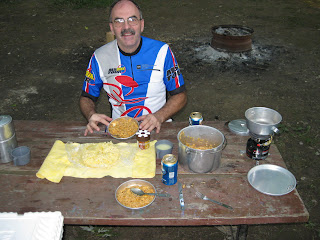