Day 5 dawned dark and foreboding. I'm not sure if the foreboding had as much to do with the weather as with that which awaited us. THE CLIMB!! We met several southern bound riders over the last few days that warned us of the THE CLIMB coming out of Cumberland. It was 22 miles in length, passed through 3 tunnels and would take us to the top of the Eastern Continental Divide, the highest point on the Great Allegheny Passage at 2392 feet.

After a quick breakfast at McDonald's, we loaded our bikes and were on the trail by 8:00 am. The climb began immediately. It wasn't a steep grade, only 1-2%, but loaded down with 40+ lbs of gear, it was enough. We each rode at our own pace, which is what you should do when you climb a mountain, especially one you want to reach the top of.

After 5 miles we came to the Brush Tunnel. The Tandem Couple From Ohio were there. We took a few pictures, exchanged pleasantries. While they worked on a mechanical problem with their front brake, Bob and I rode on. 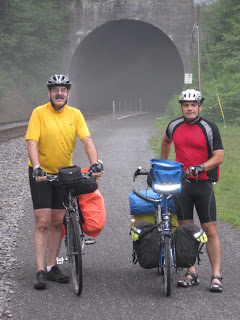 The higher we got, the more foggy and damp the air became. It never rained, but the air was so saturated with moisture, it was like riding through a perpetual mist. Couple this with my profuse sweating and the net result = I was soaked and loving every minute of it.

Bob was out of sight ahead of me and the Tandem Couple from Ohio were out of sight behind me when I pulled up to the Borden Tunnel and this is the scene that I beheld. 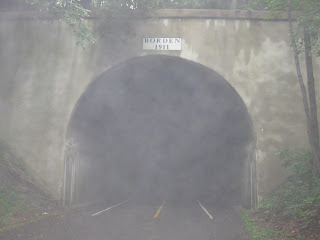 The tunnel, shrouded in fog was like a scene out of an old black and white horror movie. I don't spook easily, but the thought of riding through that dark tunnel alone unnerved me. I turned on my pitiful excuse for a head light and then rode into the mouth of the tunnel. My light was about as effective as pissing on a forest fire. I was immediately enveloped in a darkness so impenetrable that it could be felt. The light did little more than reflect off the moisture in the air and produce a faint glow 2 feet in diameter. The tunnel was only 957', but it was the longest 957' of my life. At any moment I expected one of two things to occur. Either I would ram my head into the sidewall of the tunnel or Frankenstein's monster would emerge from the darkness, clasp its hideous hands around my skull and crush it. Either way, I was going to die of major head drama. I shuttered to think of the gruesome scene the Tandem Couple from Ohio would soon ride upon.

It was with no small sigh of relief, that I emerged on the other side unscathed. I hoped that monster would spare the Tandem Couple from Ohio, but I wasn't sticking around to find out.

A little ways past the tunnel of death, I found Bob stopped on the trail. He complained about the rear wheel rubbing the brake. It turns out he had broken a spoke. I loosened the brake and silently prayed that another one would not break or else Bob would be a walking (maybe I could keep up with him then). I cursed myself for not cautioning Bob to get a few extra spokes. Note to future Bike Tourers, buy a few extra spokes and tape them to your top tube.

We continued to ride skyward and soon came upon the 3,294 ' long Big Savage Tunnel. I was grateful for 2 things. It had lights and I wasn't riding through it alone. 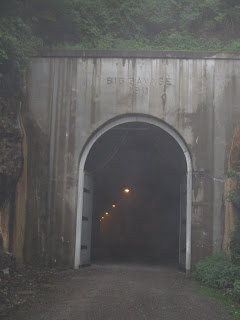 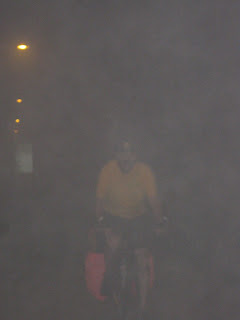 We continued our upward ride and were soon rewarded with the Eastern Continental Divide coming into view. As we drew near, the Tandem Couple from Ohio (they passed us while I worked on Bob's bike), snapped our picture. 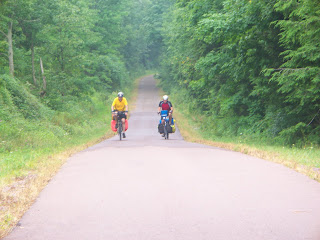 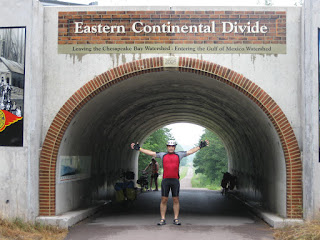