After lunch, we continued on the Western Maryland Trail for another 12 miles to its conclusion. With no small quantity of trepidation we bid this paved beauty farewell and ventured once again on the C&O.

After only 5 miles we reached Little Orleans. When rounding the corner and going under the railroad tracks the first, and for that matter, only thing in Little Orleans that catches your attention is Bill's Place. 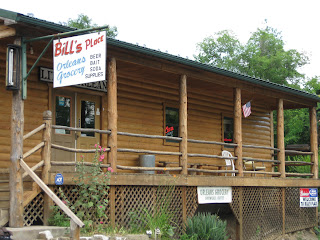 Bill's Place is Bar with some minor groceries. We had encountered several riders on our way North that recommended that when we got to Little Orleans, we owed it to ourselves to stop at Bill's Place. We locked our bikes up and ventured inside. Bill's Place was as plain and unassuming an establishment as one could ever hope to come across. Outside of a couple of regulars nestled up to the bar and a man and his wife cycling South, Bob and I were the only ones in the place.

Since we only had 3 miles to go to get to our campsight, we decided to sit down a spell. I went up to the bar and told the old bartender (Bill I assume) that I wanted a couple cold beers. "What flavor?" was his curt, but friendly reply. I ordered a Bud Light for myself and got Bob a Miller Lite (Anheuser Busch products give Bob a headache. Since we were sleeping together in a small tent in a primitive campsight that night - I didn't want to hear the "I got a headache" excuse:-)

We sat down, sipped our beers and looked around the establishment. We noticed that the ceiling was covered in dollar bills. Each one had the hand written names of the last possessor of that bill.
I perused the small stock of groceries that Bill had on hand, but given the fact that they were caked in a layer of dust and the labels were slightly faded, I decided to make due with the food rations that I had previously stashed away.

As we sat there finishing our beer or two, a final item of interest caught my attention. It was a solitary sign hanging from the ceiling. 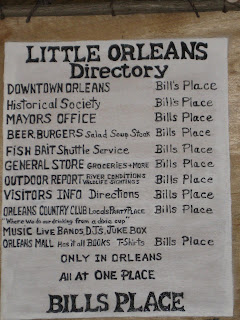 One would think that such a sign was but a joke, but if you've ever been to Little Orleans, you know that sign is as factual as the stone tablets upon which God chiseled the Ten Commandments.

If you're ever in the vicinity of Little Orleans, you owe it to yourself to stop in at Bill's Place, order your favorite flavor of beer and maybe even tack a personalized dollar beer to the ceiling. If you have such an inclination, I recommend you do it sooner rather than later, cause the old bartender (Bill I assume) was toting an oxygen cylinder.
Posted by Paul at 7:50 PM