In the weeks leading up to this ride and on numerous occasions since the ride began, Bob and I had conjured up a bit of a fantasy scenario that went something like this:

SCREEN BLURS - DREAM BEGINS "We had finished riding for the day and were in a primitive campsight casually passing the time away, when a group of 3 very attractive young ladies pulled up and begged us to share the campsight with them. In their pleading, they were quick to point out they had a case of beer iced down that they would be more than willing to share with us. As we pondered our response to this request, they felt obliged to point out, in the name of full disclosure, that there was one flaw that they needed to confess to before we agreed to share our accommodations for the night. When it got dark, they had an irresistible urge to take off all their clothes and prance around naked." SCREEN BLURS - DREAM ENDS

Since this is a family friendly blog, I am going to refrain from taking this fantasy to its culmination. I'll let your imagination fill in the blanks. Before you do so, I caution you - when Bob and I dream, we dream big.

As we got back on the trail after lunch, I had to stop and take a nature break. Bob continued on at a slow pace. Before catching back up with Bob, I came across 3, count them, 3 very attractive young ladies, stopped on the side of the trail. My attention was drawn to one young lady in particular for 2 principal reasons: First - she was blonde and if you have been following this blog for any length of time, you know I have a special affinity for blondes. Second - she was very, very pretty. I'm kinda fond of that too.

We exchanged greetings as I rode by to catch up with Bob. When I finally pulled alongside, he asked if I had seen the 3 girls a little ways back. That was a singularly, ridiculously stupid question so I simply responded, "DUUUUU!!". Then Bob went on to say that the blonde told him as he passed, "I like your tent. I want one just like it!"

"I like your tent!" What a random thing to say. As we rode on, I couldn't help but ponder just how odd that compliment was. I mean, this is what she saw in her brief glimpse as Bob passed by. 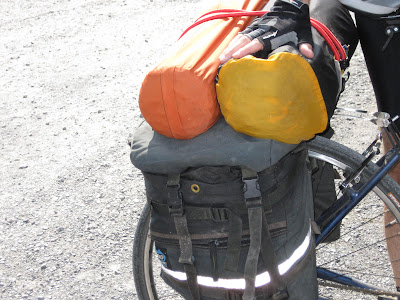 Based on this minimal info that she had available:

Yet she concludes, "I like your tent!" That simply doesn't make any sense. I wrestled with this in my mind for a few miles and then it hit me. IT WAS A PICK-UP LINE! Subtle for sure, but a pick-up line all the same. She didn't like the tent, she liked the tent's owner. She didn't want one just like it, she wanted the tent's owner. This young blonde was all but begging to spend the night in that tent making mad, passionate love with it's owner. Yet Bob and I were too obtuse to realize it. We had been out of the game so long, that we missed the snap.

I then asked Bob whether he bothered to point out to the young lady that it really wasn't his tent, but belonged to his riding partner? Bob chuckled to himself and indicated that such a confession never even crossed his devious, little mind. I was beyond myself with a deep, seething rage. Was Bob the one who searched on the internet to find this tent - NO! Was Bob the one to dish out the money for this tent - NO! Was Bob the one who through the years treated this tent with TLC - NO! Was Bob the one who just two weeks earlier spent an entire Saturday morning spraying this tent with silicone spray - NO - NO - NO - NOOOOO! Yet he passes a drop, dead, gorgeous, young blonde who compliments him on his tent and he doesn't have the decency to point that compliment where it rightfully belongs. Between my obtuseness and my self-centered riding partner, I had been robbed of the aforementioned fantasy becoming a reality. If it wasn't for the fact that I needed someone to draft, I would have choked Bob to death right then and there.

Such a set-back would have crushed the normal man, but I am not your normal man. Some people let life's disappointments diminish them. I choose to allow them to make me stronger. I try to gleam a kernel of wisdom from all of my life experiences and from this one, I inherited a jewel. The next time I come across a good looking blonde, with her bike loaded for touring, I know just what I'll say, "I like your tent!"
Posted by Paul at 6:00 AM