The Husky Haven Campground in Rockwood was, as advertised, just off the trail. The campground was in a dense forest and it had rained the night. These two things combined to make the campground a dark, dreary, damp and muddy place. We did not relish the thought of staying there for the night and we had the means, so instead we opted to rent the Husky Haven Guesthouse. 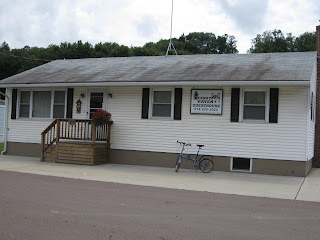 That evening I fixed a salad with spaghetti and garlic bread. We sat down at the table with real place settings and ate like kings. After dinner, we cleaned up and as the sun set, we mosied to the back deck and enjoyed a beer or two. 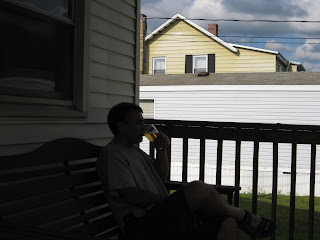 Along about this time a young man pulls up on his bike. The camp office was in the basement of the guesthouse and he was stopping to check in. It was a clunker of a bike loaded down with all manner of gear. He was an outgoing fella. He pointed out that he had traveled 80 miles today and had broken two spokes in the process. He was elated to have arrived before dark. I didn't have the heart to point out that technically it was pretty much dark already and by the time he made it across the river to the campground, it would be darker than the charred walls of hell.

I benevolently invited him to stay in the extra room of the guest house and all he would have to pay is the $35 for an additional person. He gratefully declined, pointing out that he was starting this fall in elementary education and was on a shoestring budget.

As we continued to talk, we learned that he started riding in Minnesota and was going to visit his sister in DC. He was hoping to make it by Saturday. I didn't have the heart to tell him that riding 115 miles/day on the C&O Canal Trail, on a bike that breaks spokes every 40 miles was as likely as a snowballs chance in hell.

Never the less, this young man's story and enthusiasm were inspirational. On his trip: He had retired truckers invite him to stay with them. He helped deliver a calf. One night, as he slept, he had a coon eat all his food and spread the contents of his panniers in a 50' radius. He had ridden from Minnesota on a bike I wouldn't trust to ride across the street. This young man was a true adventurist. When Bob and I bid him farewell and went into the house to go to bed, I thought I'd heard the last of him. Yet, a couple weeks later, when I got back home, the Tandem Couple from Ohio sent me an article from their local newspaper. It turns out our young adventurist in Rockwood had passed close to their home town and stopped at a local bikeshop to, get this, have some broken spokes fixed! Check out the article - Cyclists find a friend at Elmore Shop. We live in a small world.
Posted by Paul at 5:00 PM