As Bob and I lounged around the campsight lazily passing the afternoon away, 3 teenagers pulled up to the hand operated water pump. Judging by the bulging garbage bags tied to their bikes, it was obvious that they were touring the trail.

We went up and visited with them. They were sitting around the hand pump eating Fun Dip - which is various flavored powdered sugar with a candy dip stick that you lick and dip in the sugar, then lick again. I guess that's the teenage version of Power Gels.

They were from Pittsburgh. they started out in Connellsville and were making their way to DC. This was their second year riding the trail. I asked if they were camping and in unison they responded with a resounding NO. They tried that last year and didn't like it. Turns out that it rained pretty heavy and their tent filled with water. Judging by the expression on their faces, I could tell they still bore the emotional scars of that traumatic. I've been there - done that - it ain't no fun.

They were nice kids. After a spell, Bob and I left them to enjoy their Fun Dips in peace. After they left, we went up to the hand pump to fill up our pot for cooking. All around the pump, this is what we saw: 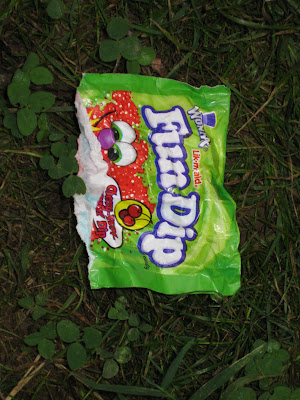 To a kid, they left their wrappers laying on the ground. To say I was disappointed would be an understatement. I wonder what, if anything, this says of today's generation?
Posted by Paul at 8:20 AM