All the stuff we read indicated that the C&O Canal Trail in the Georgetown/DC area is heavily traveled and suggested we start on a parallel trail, the Capital Crescent Trail. We did just that. We rode this smooth, paved trail for some 5 miles or so and then jumped on the C&O Canal Trail. 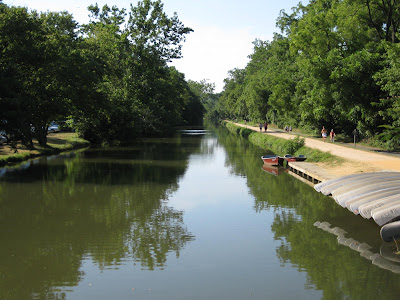 We had not been on the C&O long when Bob piped up, "Paul this trail isn't paved!" "N0 - it's not" I replied. "I thought the trail was paved?" Bob persisted. "No - it's not" I replied. "Is it like this the whole way?" Bob asked. "Yes - it is" I replied. I could tell Bob was not particularly pleased with this discovery and couldn't help but smile to myself. After a few moments of grumbling about it, Bob accepted that which he realized he could not change and rode on. I never heard another word of complaint from Bob about the trail for the next 365 miles.

The C&O was indeed quite congested from cyclists, hikers and runners. It continued this way all the way to Great Falls (MP 13). Where Bob and I took turns looking after the bikes while the other ventured on the trail to see the falls. The day was beautiful and the falls were awesome. 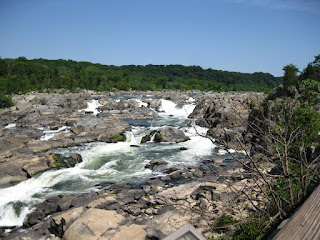 Shortly after Great Falls, the pedestrian traffic thinned considerably and we were left to enjoy the beautiful and historic sights the C&O Canal trail had to offer.

We passed lock after lock which were designed to lift and lower the barges through the 605 feet of elevation change along the way. 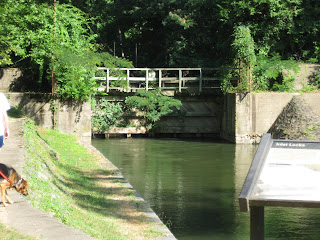 We passed the accompanying lock houses which housed the lock keeper. It turns out the lock keeper and his family were allowed to live rent free in the house. The only catch, he had to be available to open and close the locks 24/7. No weekends. No sick leave. No vacation. A free house? I don't think so. 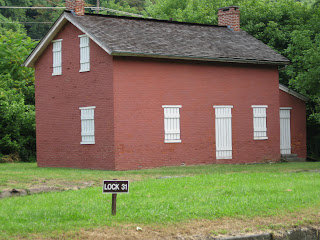 We passed numerous aqueducts, which are basically bridges used to carry the canal over the many tributaries that fed the Potomac. 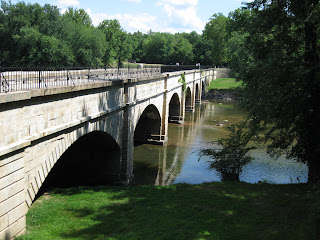 At lunch time we stopped at a small convenience store/deli at White's Ferry, which shuttles cars across the the Potomac River to Leesburg. I am huge proponent of being a lifelong student. We should always be observant and have our ears, eyes, heart and mind open to the little life lessons that we can pick up in even the most unlikely of circumstances. Case in point, as Bob and I sat in this small store eating our lunch, a big redneck of a man came in sporting a T-shirt with a few words of wisdom:

"Life is like a jar of jalapenos. What you do today can burn your @$$ tomorrow.

After lunch, I grabbed a cold beer and we moseyed over to a picnic table and watched the ferry go back and forth. Now this was how life was meant to be lived. Sitting on a picnic table, under the blue sky, sipping a beer, pondering jalapenos and leisurely watching life go by. We had no schedule to keep. We had no particular place we had to be. We were riding our bikes. We were free. 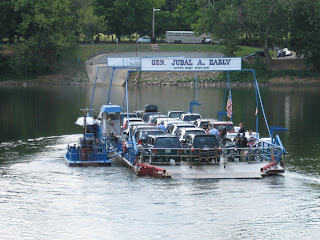