After leaving Bill's Place, we slowly made our way the final 3 miles to the campground. Tonight we decided to stay at one of the primitive sights along the trail. We ended up picking a sight called "Devil's Alley" which is described as being located in the most remote section of the trail. The campsight was absolutely perfect. It was a nice, large grassy sight just along the edge of the river. 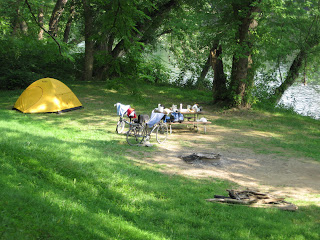 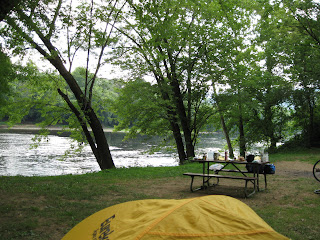 After setting up our tent and unburdening our bikes, it was time for a bath. The primitive sights along the C&O Canal trail have the following accommodations:
- clear spot to pitch tent
- picnic table
- hand operated water pump
- porta potty 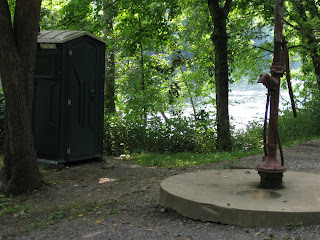 Since the aforementioned list did not include shower/bathing facilities, Bob and I grabbed our bars of soap and ventured into the Potomac. Standing on the bank, the river appears to be leisurely passing by. Standing in it up to your thighs, one realizes just how strong the currents were. We had to brace our feet against rocks and lean into the current just to keep from getting pushed over. As I sat there bathing, I kept a continual eye upstream to preclude any unpleasant encounter with a snake that might happen to be out for a swim. Of course, when a snake skin came skirting nearby, it did not do much to ease my apprehension. 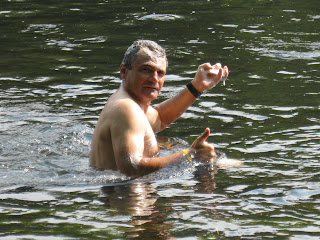 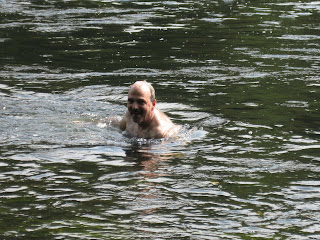 As Bob and I fixed dinner (Tuna Casserole and Bannock), we heard shuffling behind us and turning around we saw this: 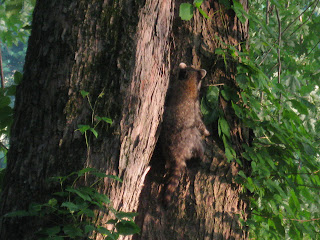 It turns out, later in the evening our furry friend would pay us a visit in search of food, but we cleaned up everything and hung our food in a tree. He would have to go elsewhere for a meal that night.

After dinner, we sat back with beer in hand and relaxed as darkness began to descend. As it did, we were treated to an unexpected light show. Lightning bugs by the hundreds began to lift out of the grass leaving vertical streaks of light in their wake. We sat back and watched them until we were fully enveloped in darkness.

We climbed in the tent and since the sky was clear, we threw off the rain fly so that the screen roof of the tent was the only thing that separated us from the night sky. The stars were so plentiful that they seemed to touch one another. From my vantage point, I imagined that if someone could make their way up there, they could run across the sky just skipping from star to star. The lightning bugs were magnified through the screen and looked like falling stars streaking across the sky. This was the last thing my mind registered before falling asleep.
Posted by Paul at 7:40 AM