After a breakfast of pancakes and eggs, Bob and I loaded up and hit the trail again. We were eager to experience what this second day had to dish out. Not to mention, we couldn't get away from the trainyard quick enough.

We rode to Harper's Ferry, locked up our bikes and took the footbridge over the river to town. 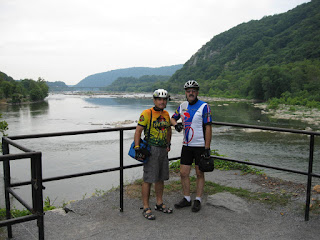 After a photo op, we returned to our bikes and met an older gentleman who was just out for a day ride. He told us he had been wanting to ride the C&O for the past 14 years with his son. Unfortunately things had never worked out. We were the first riders he had ever met that were doing the whole thing. Doing a bike trip for a whole week may not seem like much to some, but this little encounter helped to remind us just how epic this ride was. For Bob, he characterized it as a "Life Goal". I was glad to be a a part of it. As we rode on, I said a prayer under my breath for that old man - that one day - he and his son would make this ride a reality.

We stopped for lunch in a small cafe in Shepherdstown. 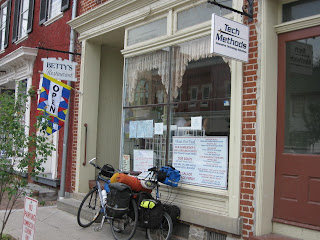 Betty's cafe was as old fashioned and country and you could possibly get. They were quite busy, so we found a spot at the counter.

When we were outside, locking up our bikes, we noticed an attractive young lady, sitting on a stone wall across the street. She had her legs folded underneath herself and was lazily passing away the summer afternoon reading the paper. From our seats in the cafe, we could look out the front window and see her. We had nothing better to do, so we sat there sipping on sodas, eating our lunch and patiently waited for her to get up and give us a better view. After some time, she finally moved. She put the paper down. She stretched. She put her hands on each side, lifted her self and leapt down from the wall. Just as she began to turn and give us the view we eagerly anticipated, a UPS truck pulled up and blocked the entire diner window. By the time he finally pulled away, the young lady was gone.