After our encounter with the blonde who liked MY Tent, Bob and I pushed on toward Williamsport. The last 10 to 15 miles of the ride, I really began to bonk. This was due to several strategic mistakes on my part. My bike holds 3 water bottles, but when we left the campsight that morning, I decided that I really only needed 2 bottles, so I did not fill the 3rd one (mistake #1). This decision in and of itself wasn't a bad one until you couple it with my stupidity throughout the day. For some reason or another, I failed to fill up my bottles during our various stops in Harper's Ferry, Shepherdstown or Antietam (mistake #2). It was not until I had one sip left in one bottle that I realized my oversight (mistake #3). We had at least 10 miles to go and I was out of water. I still had the option of using the hand pumps at the various primitive campsights, but I kept thinking about an older gentleman that I met years earlier while doing this ride. He told me that you are supposed to be able to drink that water, he tried it and had the squirts for several days. I had a hard choice - endure the squirts or die of thirst - I chose to take my chances with the latter and rode on.

With Bob pulling and letting me have a few sips of his water, we finally made it to Williamsport. We stopped in town to buy groceries before heading out to the KOA. The grocery store I remembered from year's past was out of business. I asked a passerby for the closest store and he told me it was 5 miles outside of town, in the opposite direct from the KOA. I couldn't believe it. I stood on the main corner in Williamsport and from that vantage point I could spot 3 liquor stores and 2 bars, but there was no grocery store. We abandoned the groceries and decided to settle for whatever provisions the KOA campstore sold.

I found a vending machine, bought and downed a Vitamin Water and we headed to the campground. That night we decided to skip the tent and stay in one of the cabins equipped with air conditioning, a double and bunk beds and a front porch with a swing. 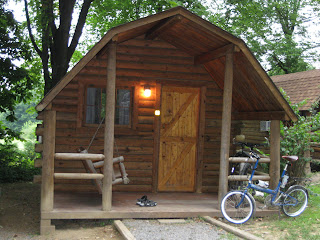 Once we unloaded our bikes, we ventured to the campstore. The menu for the night called for steak, baked potato, broccoli and wine. We ended up buying weenies, pork and beans, a can of whole potatoes and fixed a luxurious meal of beanie weenie casserole. Of course, while in Williamsport we did avail ourselves of one of the liquor stores and bought beer. It turned out to be a wonderful meal. 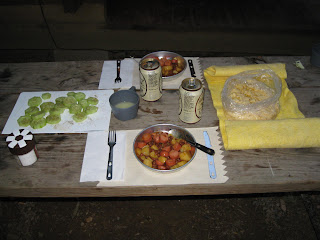 After dinner and a shower, we settled down on the front porch and enjoyed dessert. 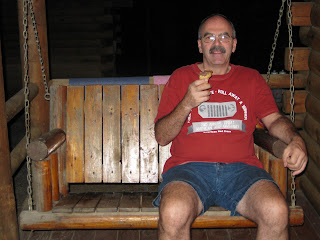 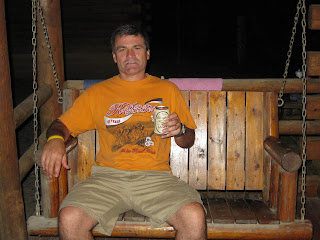