After leaving the Paw Paw Tunnel, there really wasn't much to see and do, so we did the only thing that a bike tourist can do in that situation, we rode.

We eventually came to the town of "Oldtown", which was our scheduled lunch stop for the day. We took the small bridge across the canal and headed into town. 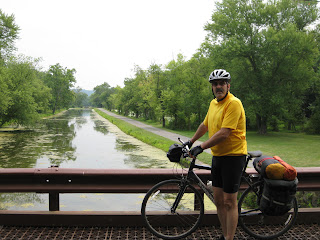 In town we found a jewel of a restaurant, called the "Schoolhouse Kitchen". It was aptly named because it was located in the old school building. The restaurant was sharing the school building with an antique auto restoration shop. There were a couple guys sitting outside the auto shop when we pulled up and what caught our attention was an old car, that was cut in half lengthwise and leaned/mounted against the wall beside them. I guess it was a sign of sorts. As we were locking up our bikes, Bob points at the cut in half car and asked, "does she run good?" The guys were quick on the uptake and responded, "yea - and she gets twice the gas mileage!" I thought that a pretty witty response, that I tend to attribute less to their improvisation and more to the fact that they've probably heard that, less than original, question from practically every bike tourist that pulls up.

We finished securing our bikes and ventured inside the restaurant. 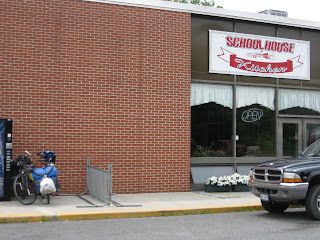 The restaurant was located in the old school cafeteria. The decor was institutional, with its painted cinder block walls and linoleum tiled floors. Yet at the same time it was warm and inviting cause it was like being transformed back in time to my grade school days. A time when I used to line up with every other kid in the school, make our way past the hand washing station where we used the pink liquid soap with such a distinct smell that even now, some 40 years later, when I smell it, brings back a plethora of memories.

We chose a table, ordered a cheeseburger and fries and then sat back and looked around. Along each wall was a row of photos depicting every graduating class from the early 1930's to the year 2000. That's when, according to our waitress, they decided to close the school and bus all the kids up to Cumberland. I could tell by the touch of sadness in her voice and the spark of indignation in her eyes, that she won't none too pleased with that decision.

Bob redeemed himself from the ridiculously, predictable question that he asked earlier about the half car and asked our waitress if she was on one of these walls. "Yeah", she chuckled and blushed, then nodded to her left and said "1969". I was unable to keep my superior, analytical mind from performing the complex calculations necessary to ascertain her exact age. However, I did surprise myself in that I possessed the necessary and unfortunately for me, rare discretion to keep from blurting out, "well that means you're 58 years old!!"

Our food came, served on styrofoam plates. The cheeseburgers were awesome, the fries, divine. We savored every bite, as though we wanted this moment to last. We weren't quite ready to let go of our childhood memories and transform back to the present day responsibilities and hassles of being a grown-up. Therefore, I ordered coconut cream pie and Bob got the brownie delight and we enjoyed being school kids a little longer. Yet, just like when we were young, the end of lunchtime bell rings way too soon and we must get on with life. Fortunately, life for Bob and I consisted of riding our bikes for a few days longer and we planned to take full advantage of every mile.
Posted by Paul at 6:30 AM