We arrived at the River's Edge campground and noticed that the Tandem Couple from Ohio must have just gotten there themselves, because they were in the camp office checking in. When they came out, we confronted them about the incident earlier on the trail when we were Left in Their Dust. I tried to explain that my ringing of the bell was simply to signal the passing of a milepost, not the start of a race.

The Tandem Lady from Ohio commented that she thought she heard a bell and turned around and saw us. It turns out that a discussion ensued in which her husband wanted to wait for us to catch up, so that we could all ride together and fellowship. The Tandem Lady from Ohio would have none of that. She was in favor of putting the hammer down and dropping us like a bad habit. As you can tell by my previous post on this subject, she won the argument.

She then proceeded, unnecessarily I might add, to point out that I had a WIMPY BELL. "Perhaps" she added, "if your bell were more manly, I would have waited for you!" She then began to compare my bell to little toy horns that they put on kid's bikes. Not noticing the tears that were welling up in my eyes, she went on to make these sissy, little, dinging sounds to mockingly simulate the perfect intonation of my retro-style brass bell.

To say I was taken aback by her disparaging and insensitive remarks would be an understatement of astronomical proportions. The fact that she was blonde, and an attractive one at that, further added to my befuddlement and disconcertedness. Here I was, going through life, happily ding-dinging along and now my very dingerhood is ridiculed and despised.

This Tandem Blonde Lady from Ohio had no idea the hallow ground upon which she trod. As any of my long time readers know and as attested by I Lost My Bell Today, my bell holds a very esteemed place in my life and heart. One can talk trash about my wife or kids or just about anything else in my life and I'm pretty good natured about it. But to criticize my dinger - well that crosses a line.

I am a Dinger Man and proud of it. I have a dinger on my Touring Bike. 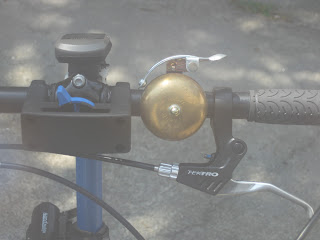 I have a dinger on my Fixed gear Bike. 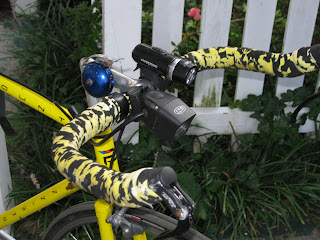 I have a dinger on my Roadster. 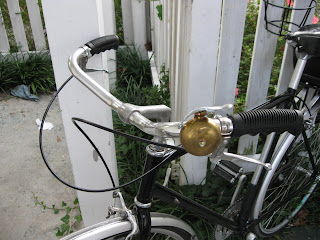 A man's dinger is a deeply personal thing. I searched long and hard to find just the right one:

Yet here was this Tandem Blonde Lady from Ohio all but saying I had a "dinky dinger". I ask you, my dear readers, what does such reckless frivolity say about her? What kind of woman would be so brash as to make sport of a strange man's dinger, that she's only had the pleasure of hearing ding once?

I beg of my dear readers, refrain from picking up stones and casting them her way. I have had a month to painstakingly wrestle with this unprovoked attack upon my dinger and I think I have happened upon a plausible explanation. Although I still bare the scars, I have found it in my heart to forgive her and once you hear it, I am sure you, my benevolent readers, will let the stones drop from your righteous hands.

The wrongs that I suffered at her words were grave, but holding a grudge against her would only lessen me. Not only have I forgiven her, but I have decided to take a step to end her suffering and possibly spare future, innocent, unsuspecting, happy-go-lucky men from the trauma associated with her unsolicited attacks upon their dingerhood.

I am going to give her a dinger of her own. I hope it gives her years of dinging pleasure. 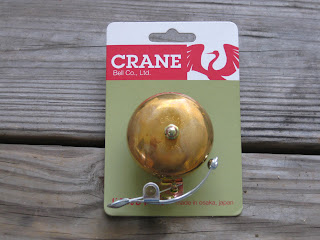 PS - The following day, I continued to ring my bell at every milepost, but not with near the enthusiasm and confidence as on previous days:-(