Bob and I awoke on the second day of our epic ride as two weary travelers.

The root cause of our fatigue had nothing to do with the miles we had ridden the previous day. We are two finely honed physical specimens of unparalleled strength and unrivaled endurance.

We woke up dragging namely for one sole reason - TRAINS!!! 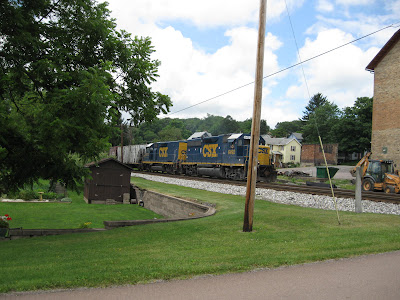 The literature said that Brunswick Family Campground was subject to "some train noise". I'm envisioning the occasional train chugging along, quietly blowing its soothing whistle. No big deal - in fact - I thought hearing a distance train whistle as I lay there in my tent would conjure up pleasant images of distant lands.

The fact of the matter, and what the literature fails to point out, is the campground is adjacent to a train yard. Now for those of you unfamiliar with train yards - they work night shift. I kid you not when I say ALL NIGHT LONG the trains clinked and clanked, banged and bonged, roared and rattled, squealed and squawked and honked and howled. The attacks on our sense of hearing were absolutely unrelentless.

Laying there in the dark, listening to the cacophony of noise, afforded me the opportunity of profiling Train Engineers. They resent the fact that they have to work all night long and therefore don't give a rats behind how much noise they make. They could be easy on the throttle to avoid the incessant roaring of the engines. They could gently connect the cars one to another. They could blow the horn in short, subdued blast. BUT THEY DON'T! Instead, every time they have to move the engine, they throw the throttle to full speed ahead. Everytime they have to connect to another car, they try to get up as much speed as possible in order to make the connection a minor nuclear explosion. And for God's sake, everytime they even come close to a car crossing, they put both hands on the whistle rope and swing from it until their arms can no longer hold their weight.

Train Engineers - don't let the innocent image of gentle old men wearing coveralls and a blue and white pin striped hat fool you - they are but a sick, sadistic, foul lot.
Posted by Paul at 6:00 AM