We left Williamsport and continued North on the C&O. We rode along quietly. On previous days, we rode side by side and chatted continuously about the day, the scenery and the awesomeness of the trip. Today, we rode apart for a bit. Outside of the obligatory bike command (mud hole, rock, root...) and the dinging of my bell at each milepost - we rode in silence. This mood had nothing to do with the lack of beauty around us, nor the lack of things to talk about. We were riding slowly which afforded us the opportunity to be still and introspective.

After 13 miles or so, we temporarily ventured off the C&O and headed over to Fort Frederick which is a British outpost dating back to before the revolutionary war. 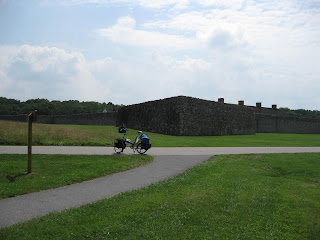 From Fort Frederick, we continued on the C&O for another couple miles and then decided to jump on the Western Maryland Trail which parallels the C&O for some 22 miles of paved trail bliss. After 100+ miles of sand, gravel, clay, mud that makes up the tow path, the Western Maryland trail was a welcomed respite. we were still going uphill and we still had a headwind, but the superior trail surface immediately lifted our speed to a pleasant 15 mph. 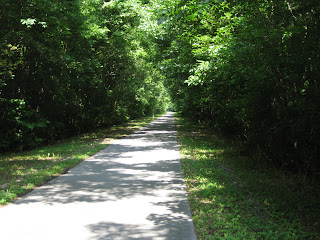 We stayed on the Western Maryland Trail all the way to Hancock where we stopped at Weaver's Restaurant and Bakery for lunch. 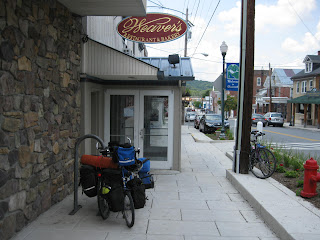 We enjoyed a wonderful meal of melt in your mouth turkey breast over toast and mashed potato's all smothered in gravy. It was absolutely delightful. Bob further indulged in a slice of cherry pie and was gracious enough to share a bite or two with me.

A perfect night sleep - wonderful weather - a smooth trail - yummy food - this trip just kept getting gooder and gooder.
Posted by Paul at 6:00 AM