Midway through the day, we stopped in the town of Ohiopyle, where once again we ran into the Tandem Couple from Ohio. 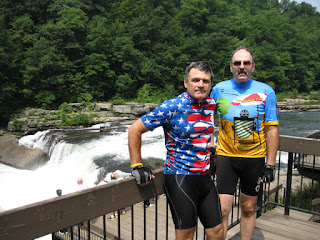 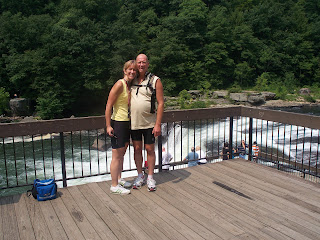 After a few pictures at the waterfalls there in town, the four of us found an outdoor deli and had a nice lunch together, which was interrupted when a brief rain storm blew through. After the storm, we went our separate ways.

Later that afternoon, we were cruising along at 17-18 mph. Actually, Bob was cruising at 17-18 mph, I was simply tucked in tight behind him, drafting for dear life. We noticed the Tandem Couple from Ohio up ahead. We were gaining on them slowly, but surely. Along about that time, we passed a mile marker and I did what I had been doing at each mile marker for the past couple hundred miles. I rang my bell. The Tandem Couple from Ohio heard it and turned around.

One would think that when you notice your two new friends coming up behind you, that you would sit up and await their arrival with glee. Then we could all ride together and fellowship. This would be particularly true were those news friend attempting to hail you with an audible signal (of course that wasn't why I rang the bell, but they didn't know that). Yet - what one thinks and reality aren't always the same.

I could tell that my ringing the bell had sparked a lively discussion between the Tandem Couple from Ohio. Then the stoker assumed the tucked position and I knew we were in trouble. I have ridden with and among tandems quite a bit over the years and in so doing have learned a fact or two about them. Going up a hill, tandems ain't for dooky. Their ascent is slow and tedious. However, going down a hill or on the flats is an entirely different story. A tandem is twice the horsepower but not twice the resistance. These two things, in downhill or flat conditions, mean raw power and speed.

This particular section of the trail was flat if not slightly downhill, so I knew we had a battle on our hands. As for me, I was willing to do my part. I was tucked in 6" behind Bob's wheel and I was ready to ride as fast and hard as necessary to hold that wheel. All Bob had to do was ride up front, break the wind and close the gap. It turns out he was not willing or able to hold up his end of the deal. He faltered, he slowed and the tandem Couple from Ohio left us in their dust.

Bob and I could have be crestfallen, either by the way we were so rudely shunned by our new friends or by the fact that such stellar physical specimens as ourselves were left sucking wind in their wake. However, as I am sure my astute readers have ascertained by now, Bob and I are bigger men than that. We decided to take the high road and make excuses. We could have taken them if:

They were laden with 50 lbs of gear, instead of the pittance load of clothes that they bore.

They were roughing it by camping, instead of pampering themselves with B&Bs.

They were riding the full 50 miles to McKeesport, instead of the meager 30 miles to West Newton.

...The list goes on, but as you can see, Bob and I were clearly stronger and faster. Our being dropped was entirely due to the Tandem Couple from Ohio taking unfair advantage of circumstance.
Posted by Paul at 5:45 AM