We woke up around 6 am on Sunday morning, loaded our bikes, slipped down to breakfast in the motel and headed out for our epic ride. 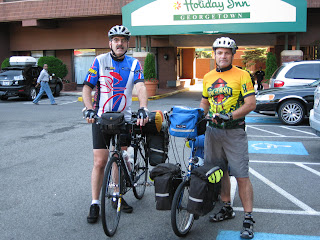 Lesser men would have given up, pointed their bikes North and hit the trail. Not us, we are engineers. We wanted to start at the beginning. Milepost 0 is as beginning as you can get. We were gonna find and start at Milepost 0 even if it took us all week to find it.

Bob asked a couple of cyclist lounging on a park bench. they pointed us in the general direction of a nearby boat center (Thompson's). Boaters were busy carrying their canoes/kayaks/row boats down to the river. We pushed our fully loaded bikes through the hustle and bustle of boating activities. We were about halfway across the boat center property when an older gentleman yelled at us and told us we were going the wrong way. He told us there was was no trail in the direction we were heading. We explained that we were in pursuit of Milepost 0.

The older gentleman didn't have a clue about what we were talking about. He yelled at another boater who held a kayak suspended above his head. That busy boater motioned with his boat in the direction we were heading.

We pushed on to the end of the boat center and around the side and were rewarded with none other than Milepost 0. 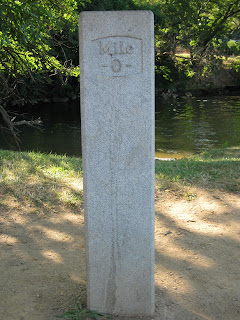