After spending a few minutes in the C&O Canal Visitor Center in Cumberland, Bob and I rode to the motel. As we pulled up to the front door, we noticed a couple wrestling a tandem off the roof of their car. They were being dropped off in Cumberland by his father and were going to spend the next few days riding the Great Allegheny Passage. As we talked briefly, it turns out that their itinerary matched ours except they were staying in B&Bs and cabins while el-cheapos Bob and I were camping. I will affectionately refer to this couple as the Tandem Couple from Ohio in that they will have the distinct honor of being featured in a blog post or two over the next couple days on the trail.

I checked into the motel and we wrestled our heavily laden bikes up the elevator and into our room. It was a great sigh of relief when I walked into the room and beheld 2 double beds. We turned the AC on full blast, threw aside the curtains and to what did our wondering eyes behold but an avalanche of water in the form of a torrential downpour. I couldn't believe it. We had been on the trail 4 days and 3 nights. We were vulnerable to the whims of mother nature and in all that time, not a drop of rain fell. Yet the moment we are all nestled nice and cozy in a motel room, the bottom falls out. Bob and I - we must be living right.

After hot showers, shaves and donning clean clothes, we headed out for dinner. I was craving steak, had been ever since Waynesboro when our planned steak dinner was trumped by beanie weenies. We headed for the Baltimore Grill at the recommendation of the bartender in the motel. 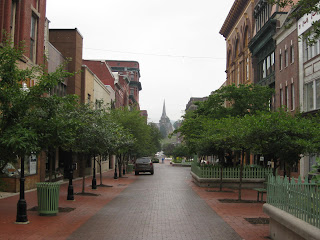 The Baltimore Grill was located on Baltimore Street (shown above). It was a small, obviously local joint. Bob ordered Chicken Alfredo and I splurged on the surf and turf which was Filet Mignon buried under a mountain of crabmeat.

As we waited for our food, I noticed another cyclist wearing a jersey which read LiveForThePath.com. I asked him about it and he said it was his website where he was keeping a journal of his ride across the country. He started in Arizona and was nearing the end of his journey in Baltimore, MD.

After dinner, Bob was in the mood for ice cream. I had come to the sad realization that Bob had an ice cream problem. I was in favor of finding a nice pub where we could enjoy a less addictive refreshment like beer, but Bob preferred to walk all around the town of Cumberland in order to get his ice cream fix. After walking practically every block in downtown, we finally found the elusive creamery that Bob had read about in the motel. The place was closed for their annual employee picnic. Bob took this news hard. As he stood there with his face pressed up against the dark window, I couldn't help but notice his hands shaking a bit and I'm not certain, but I think I saw a tear reflected in the glass.

After a bit, I gently pulled Bob away from the creamery window and we made our way back to the motel. I was full and had a few too many beers at the restaurant and I was getting real sleepy. I put on my pajamas and crawled into bed. It was around 8:30 and Bob absolutely refused to go to bed at such a ridiculous hour, so he turned on the TV. I piled all the pillows on my head in a feeble attempt to block the light and sound of the TV. I finally gave up and started watching the movie. I was really getting into it. At the climactic moment of the film, when the guy and girl finally reach for one another for a passionate embrace, the TV goes blank. Bob had apparently gotten tired and turned off the damn TV. I muttered under my breath likening Bob's noggin to the male sex organ and fell asleep.
Posted by Paul at 5:30 AM