After lunch, we continued North toward Cumberland, our scheduled stop for the night. As we got closer to Cumberland, the condition of the trail degraded to the point that we were constantly zig-zagging from one side of the trail to the other in order to navigate a veritable minefield of mud puddles. It made the going slow, if not a bit annoying. At the same time, the sky was growing more and more ominous. So far on this trip, we had been spared any rain, I was really hoping our luck would hold out at least until we got off the C&O. Generally, I don't mind riding in the rain, in fact, I rather enjoy it. However, I've ridden on the C&O in the rain and it is far from an enjoyable experience. I did not relish the thought of being caked in mud when we got to Cumberland. I've been there and done that - yucky!!

After some time, we arrived on the outskirts of Cumberland, where in places, the trail is virtually in people's backyards. The condition of the trail improved considerably and we began to cruise along as Cumberland appeared in the distance. 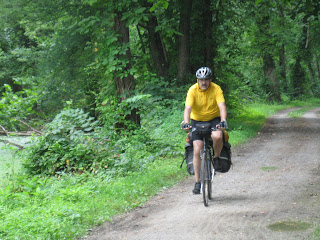 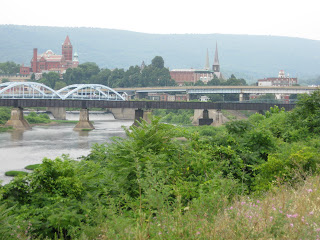 We finally rode into Cumberland and in so doing bid farewell to the C&O. In the heyday of the canal, men would slowly lead mules along the towpath, burdened with a barge laden with goods. Today, Bob and I finished traversing that same 184.5 mile path, guiding our own Beasts of Burdens. 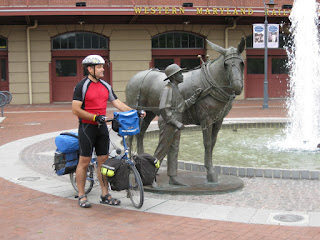