Do a Little Dance

Average Speed - I wonder if Gatorade would make me faster 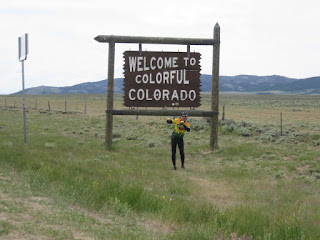 In case you are wondering, that's me dancing.  While I have enjoyed Wyoming, it has worn me out physically and mentally.  I'm  ready for something new.

Today was a short day, but don't mistake that for an easy one.  It was uphill all the way and I had a headwind for the first half.  It was stop in Walden or ride an additional 60 miles to the next town.  That's 110 miles with a major climb to boot - not happening.

Given the winds and terrain, I realized early in the day that this was gonna be a long slog.  There were no services the entire route, so I began to worry about my water supply.  I started doing the math in my head and rationed my water based on distance.  I was getting really thirsty.  Just as I was approaching the Colorado line an SUV coming in the other direction slowed and the man driving stuck out his arm holding 2 bottles of water.  I excitedly nodded yes and he stopped.  Water problem solved, I drank heartily.  Is that cool or what?

It's good being in Colorado, but all I need to do is look around and the mountains that await me in the not too distant future make their presence known.  Oh well, that's a problem for tomorrow's Paul.
Posted by Paul at 8:34 PM