So before I get to today, let me tell you a story about last night.  As you can tell from my previous post, I stayed in a county campground outside Fordsville.  I was the only one there and it was out in the country, away from any civilization.  That was bit disconcerting by itself.  Anyway, as darkness approached I climbed in my tent. As I was laying there a truck pulls up to a nearby dumpster and starts to throw away trash.  They were there quite a while and it was a little uncomfortable.  After a bit, the truck backed out and pulled away.  I breathed a sigh of relief and promptly fell asleep, only to be awakened an hour later by another truck, without a muffler, pulling up to the pavilion I pitched my tent under.  They must have stayed there for the better part of an hour.  Once again, I lay in the dark waiting, with all senses on high alert.  They finally started the engine and pulled away.  I once again breathed a sigh of relief and fell alseep, only to be awakened a couple hours later (1 AM in the morning) by another car pulling into the parking lot.  This is when things got interesting.  Soon after they pulled up, I heard voices.  It was a guy and girl talking as they walked in a big circle around the pavilion.  After completing one loop, they started another, this time they were just outside the pavilion.  I could just make out their silhouette.  About 3/4 of the way around, they stepped under the pavilion where I lay in my tent.  At this point, they must have noticed something and stopped just 10 feet from my tent.  I heard the girl whisper to the guy "is someone here?"  I responded, in a deeper voice than I intended,  "just a man trying to sleep".  I must have scared the living crap out of them because the girl screamed and started running.  I apologized for frightening them and they went on their way.  They must have continued walking and talking in the park until 3 AM.  It was long night.

Anyway, today was a very nice ride.  There were some big hills, but it was overcast and a lot cooler.  That made all the difference in the world.  About 30 miles into the ride, Ralph, a guy I met back in WY, came riding from his hometown (Elizabethtown) to join me.  We rode the last 40 miles together.  I am staying at he and his wife's (Pam) home for the evening.

A couple pics of the traffic I encountered today.  It took a while, but I was able to chase down the horse drawn buggy and blow by them.  That's the first vehicle I've been able to pass this entire trip. 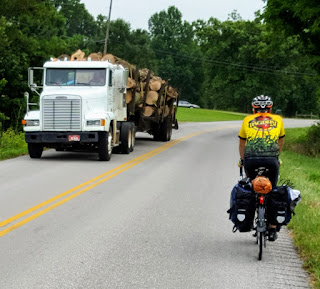 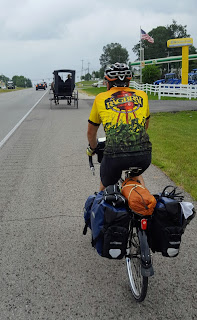