So Much for an Early Start 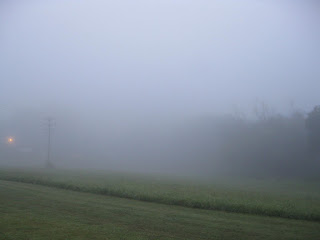 I had a long day ahead of me in the mountains.  So I decided to get an early start.  As you can see by the above pic, the weather had other ideas.  These narrow, winding mountain roads naturally limit visibility, the fog exacerbates that.  I did the only thing I could do...adapt...I rode to a nearby cafe and enjoyed some french toast, sausage and coffee.

It was still foggy when I started out, but soon enough the fog cleared 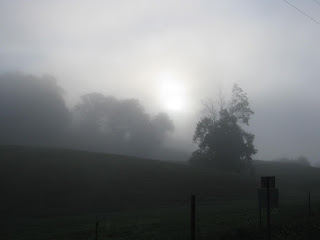 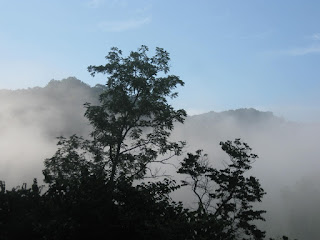 I lost count of how many dogs chased me today.  I've gotten to the point that I don't fret it.  I just deal with each one as they occur.  There was one encounter that I found particularly troublesome.  I was on a small, winding county road waaayyy back in the sticks... 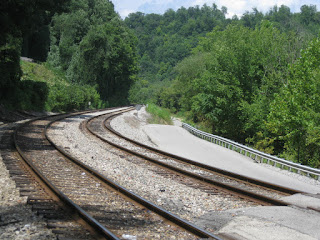 I was worried that maybe I had missed my turn.  I passed by this house, which was right on the road.   The owner was sitting on the front porch.  As soon as I passed by I heard him say, "go boys" and his two dogs lit off the porch and headed for me at full speed.  I stopped pedaling and yelled at them to go home and they both stopped in their tracks.  I guess I spoiled the fun of the owner, so he whistled and called them back.  Unbelievable!
Posted by Paul at 7:45 PM