Average Speed - I'm the brawn, you'll have to ask the brains

Last evening around 8:00, I retired to my tent for a peaceful night's rest.  I had the park to myself - wrong!  It was about this time that kids started to show up to play.  I guess they were waiting for it to cool down.  A makeshift game of basketball began and I had pitched my tent 20' from the basketball court.  I comforted myself in the fact that it would soon be dark and they would have to quit -  wrong again.  The dadgum thing had lights...oh well...it's their park...I'm just grateful to be able to use it!

My ride across Kansas has evolved into a race against the winds and the heat.

Bottom line, drag my butt out of that tent before the crack of dawn and hit the road as soon as it is light enough to see.

One thing I noticed today was that at any point in time on my 80 mile ride I could spot a grain elevator.  They are in every town and sometimes in between.  A testament to the fertility of this land.  They are by far the tallest things on the plains.  I kept thinking about that scene in Lord of the Rings where they lit the signal fire in Gondor and subsequent signal fires were lit across the land until the signal reached Rohan.  Lighting a fire atop these grain elevators would be an excellent way to send a signal across Kansas.  I know this is a random thought, but while I'm riding, I have a lot of time to think! 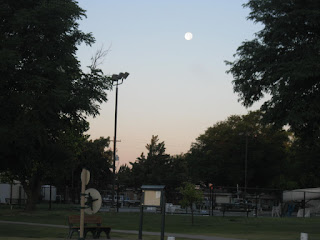 City Park at Sunrise and the Moon 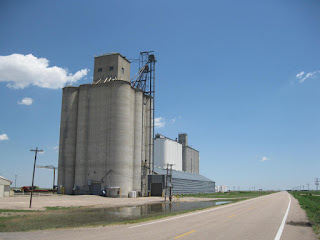